Screenshot of The Intercept’s investigation, ‘The FBI’s Secret Rules’
A new report published by the Intercept reveals the FBI’s wide-ranging powers from the surveillance of journalists to the treatment of informants after the investigative news site acquired a trove of confidential FBI documents.

The papers include the FBI’s governing rulebook, known as the DIOG, and classified policy guides for counterterrorism cases and handling confidential informants.

The investigation exposes the FBI’s spying on journalists, its deportation of immigrant informants when they are no longer of use, and other instances of invasive surveillance on targets without need to show suspicion of wrongdoing. 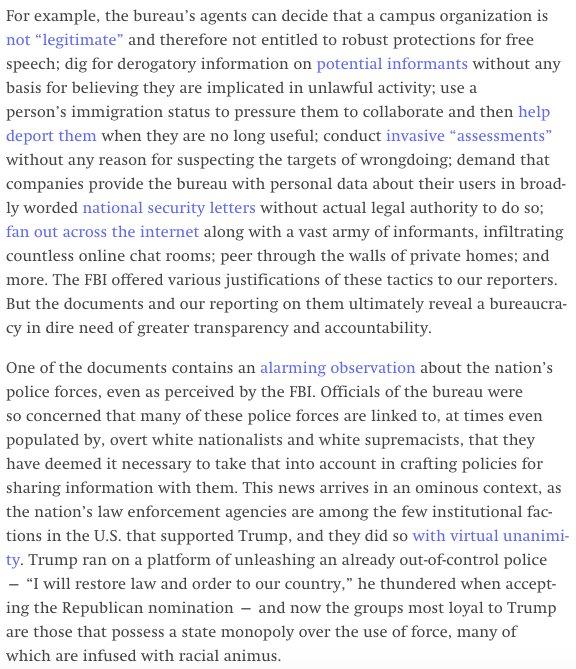 Among the key findings revealed by these previously secret FBI docs https://theintercept.com/2017/01/31/secret-docs-reveal-president-trump-has-inherited-an-fbi-with-vast-hidden-powers/ …

The Domestic Investigations and Operations Guide reveals the alarming powers the FBI has to spy on journalists. Classified rules dated from 2013, show that agents need approval from only two internal officials to gain access to a journalist’s phone records with a National Security Letter.

The FBI’s general counsel and the executive assistant director of the bureau’s National Security Branch are required to sign off on the NSL, according to the document. This allows the agency to bypass the normal procedure of going to the courts for a subpoena or search warrant before accessing the information.

If the FBI is trying to uncover a confidential media source by targeting the journalist, it requires additional approval from the assistant attorney general for the Justice Department’s National Security Division. However, if they are trying to identify a leaker by targeting the records of the potential source, and not the journalist, the Department doesn’t need to be involved.

Revealed: An 11-part investigation into the agency that shifted the election. Based on 1000+ secret @FBI documents. https://theintercept.com/2017/01/31/secret-docs-reveal-president-trump-has-inherited-an-fbi-with-vast-hidden-powers/ …

The 2013 NSL rules for the media mention only telephone toll records.

Thousands of NSLs are issued by the FBI each year often targeting tech companies for data on a user’s internet usage and browsing history. These come with a gag order forbidding the company to disclose the request until the FBI lifts the order.

A spokesperson for the FBI, Christopher Allen, would not confirm to The Intercept if the rules had been changed since 2013 but said that they are “very clear” that “the FBI cannot predicate investigative activity solely on the exercise of First Amendment rights.”

A number of documents reviewed by the Intercept raised concerns about the civil liberties of people sought out as informers. The Confidential Human Source Policy Guide, a classified FBI manual dated September 21, 2015, outlines the process agents must follow in recruiting, handling and separating themselves from informants.

Practically anyone can be targeted as a potential informer – even minors without the knowledge of their parents – if permission is granted from supervisors, according to the manual. Agents are advised to investigate possible informants and gather information on them which can be used to pressurize them if they are unwilling to comply.

Agents can also covertly recruit informers online, using an alias and disposable email, but are allowed to provide a limited amount of information.

The FBI has defended its decision not to reveal how it hacked the San Bernardino shooter’s iPhone, citing security considerations. The technique could be used by “hostile entities,” it said in court.

The guide devotes a whole chapter to the topic of immigration. Agents are prohibited from working with informants who do not have legal immigration status so are required to assist with this process by liaising with Immigration and Customs Enforcement (ICE) before recruiting them as an informer.

However, according to the manual, this is more often than not “temporary immigration relief” and, once they are of no more use to the bureau, agents are ordered to assist ICE in finding them.

“If the [informant]’s location is unknown, the [FBI agent] must work with ICE to locate the individual,” the classified manual reads.

The guide also reveals details of two programs which widen their scope regarding immigrants who can be of a benefit to the agency.

One allows agents to bring “inadmissible or deportable” informants into the US while the other allows an immigrant who otherwise would not be allowed to leave the country and return, to go to another country on FBI business and be permitted US re-entry.

Complaints of the FBI using immigration status as leverage to recruit informants have surged in recent years, according to the Intercept.