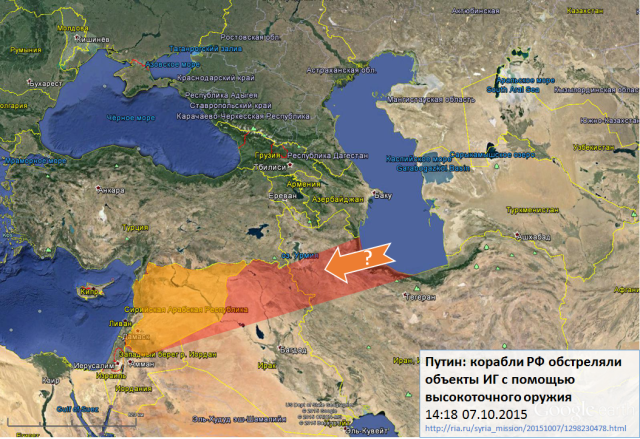 Cruise missile strikes held from the south-west part of the Caspian Sea against militants in Syria have been agreed on by Russia and its partners beforehand. This was stated today by the Chief of the Main Operational Directorate of the General Staff of the Russian Armed Forces Colonel General Andrei Kartapolov.

Andrei Kartapolov told that on October 5-6, the Russian reconnaissance had discovered a number of important objects of militants, which were to be destroyed immediately and explained that their engagement had been decided to be carried out with the use of long-range cruise missiles.

He emphasized that the cruise missile strikes had been agreed on with the Russian partners beforehand.

Andrei Kartapolov also reminded that the Russian party had already announced its “plans to build-up the intensiveness of strikes against the ISIS and Jabhat al-Nusra objects”.

Andrei Kartapolov mentioned that in order to provide security for civil population, the flight corridor for cruise missiles had been planned over uninhabited areas. The strikes engaged plants producing ammunition and explosives, command centres, storages of munitions, armament and POL as well as a training camp of terrorists on the territory of the Raqqah, Idlib and Aleppo.

According to him, engagement of these facilities reduces the mobility of militants and deprives them of the ability to perform heinous terrorist attacks.

All the assigned targets have been engaged.

During his meeting with journalists, Andrei Kartapolov stressed that all the targets had been properly analyzed using the data received from space and radio reconnaissance, communications interception, and photos made by UAVs. Data collected by intelligence of Syria, Iran and Iraq, including human intelligence, was also used.

He also explained that the strikes were carried out only against verified targets. Each strike is preceded by a long and thorough preparation.

The special file on each facility is prepared before the strike.

Andrei Kartopolov said that the final decision on elimination of targets was made only after the analysis of all the data and computer simulation of the strikes. Aviation targeting was made according to the same algorithm.

He stressed that modern high-accuracy munitions were used in Syria. High-accuracy engagement is reached by complex use of such munitions with hi-tech armament systems.

Andrei Kartopolov stated that the maximum deviation did not exceed 5 metres.

He also noted that Russia had repeatedly cancelled strikes against the terrorists “just because they left their bases and camps and sheltered as a rule in inhabited areas and in close proximity to religious institutions”.

Andrei Kartapolov mentioned that nevertheless, the Russian Armed Forces were being accused of hitting civilian facilities and mosques.

He stressed with full responsibility that objects situated in inhabited areas were not considered as targets.

According to Andrei Kartapolov, Russia suggested its partners to share locations of the “Islamic State” objects but there was still no answer.

Andrei Kartapolov stated that it shows that either the partners did not have the coordinates or they did not want us to make strikes against ISIS; the reason remained unclear.