Some “advisors” have talked openly on C-SPAN-covered events about their involvement in the election and in the “transition” within Russia. 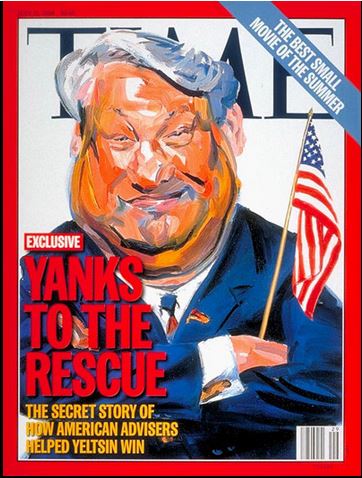 Boris Yeltsin’s victory at the 1996 election was the direct result of American political consultants, and personally of Bill Clinton, says World Socialist Web Site.
–
Not only did they supervise the election program of the Russian president, and followed the ratings, but some evidence suggests that the elections were indeed rigged. The real victory belonged to Gennady Zyuganov, Communist Party leader, explains the author.

“The US electoral system is one that legally allows super-rich financial oligarchy to bribe candidates, parties and elections,” – he writes. So, for example, in the disclosed correspondence of the Democratic Party National Committee, it is clear that they were trying to sabotage the campaign of Bernie Sanders, by the manipulation of the electoral process.
–
“If we are talking about manipulation of elections in other countries, the US ruling elite, its media and political puppets know very well what they are doing. The United States is the world leader in the intervention in elections in other countries”, – says the author of the article, citing research data. In the period from 1946 to 2000, the United States 81 times interfered in the electoral process in other countries.
–
In addition, this figure does not include the operation to overthrow regimes and military coups that took place in Iran, the Congo, Guatemala, Chile and so on. In fact, the article notes, the US government and its accomplices leave almost no one without intervention, including nominal allies.
–
However, one case, according to the author, is especially notable in the list of the US undisguised insolence.

“We are talking about 1996, when Boris Yeltsin went to a second term. Then the White House and President Bill Clinton personally conducted a massive campaign in support of the leader, whose regime was established to monitor the final collapse of the Soviet Union and the imposition of capitalism.”

By the time that Yeltsin announced that he will go for a second term, he was one of the most despised people in Russia, asserts the author, due to the privatization of the Russian economy and its catastrophic consequences: There was a 50 percent GDP contraction, hyperinflation, rising corruption, crime, the collapse of the medical sphere, depletion of food and fuel, non-payment of salaries and pensions, living standards fell to catastrophic levels. The war in Chechnya was tearing the country apart in a brutal civil against foreign-funded Wahhabists, while some regions in Siberia stopped conscripting their young men into the army and sending taxes to the federal budget – effectively Russia was disintegrating into several states, and remained a ‘federation’ only in name.
–
Yeltsin’s opposition was so strong that in 1993 with the help of a dictatorial decree, he dissolved parliament, and with the help of the military, suppressed protests – killing, according to the author of the article, about two thousand people.

“This was the so-called democratic character, which was supported by the United States in the 1996 elections,” – the author writes.

–
According to the journalist, Yeltsin’s entourage called on him to cancel or postpone the election, fearing that his opponent, Gennady Zyuganov, would win. However, the“rescue of Yeltsin was delegated to American political consultants.” Moreover, this operation was not particularly secret: after the victory of Yeltsin, Time magazine made the appropriate cover and an article, describing how it was done.
–

The result was due to the American political consultants who had experience in such cases as Watergate and helping Bill Clinton become the governor of Arkansas. The three worked for four months in Russia and received a salary of $250 thousand, plus an unlimited budget to carry out surveys and other civil-political life activities. To hide their mission, they said that they had come to Russia to sell TVs.

–
The study finds that Yeltsin obtained only 6% of the electorate vote.
–
Around the same time, the International Monetary Fund, on US request, gave Russia a loan of $ 10.2 billion, which allowed the Russian government to “spend a huge sum for the payment of long-owed wages and pensions to millions of Russians”, forever tying its hands by interest rates. (This was later paid off during Putin’s first term)
–
The exact role of the Clintons remains blurry, but the US president personally said that he wanted for Yeltsin to be elected as opposed to Zyuganov; calling Yeltsin and teaching him how to campaign – in effect becoming the political adviser of the Russian President.
–
The author of the article believes that Yeltsin lost the election, and the results were rigged. The same opinion was expressed in 2012 by Dmitry Medvedev.
–

“This story emphasises the absolute hypocrisy of the CIA, the Democratic Party and the media, who are trying to foment anti-Russian hysteria to prepare aggression against Russia, attributed to its mythical intervention in what has historically been the preserve of America – to determine the outcome of elections in other countries”, – concludes the author.