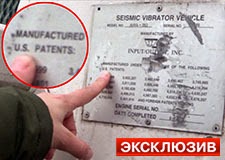 Here on the outskirts of the village of Shishkovo under the snow and rain rusts the expensive equipment: four residential trailers for employees, diesel substation and equipment for conducting seismic surveys. Judging by the labels this equipment was certified in the U.S., and now it is in full possession of the people of Donbass.

Local residents recall that this was a temporary base of geologists from Ukrgazdobicha. The residents of the Shishkovo witnessed the beginning of the work.

– This equipment was brought at a time when in June the Ukrainian tanks came from Metallist. Started shelling the city. As we suppose, Kiev authorities planned a quick capture of South-East, Donbass in particular, for further extraction of shale gas, ” – explains a local resident Vladimir.

“They were from Western Ukraine. Geo-research. They were saying something about gas, said there is shale gas here. First there were two vehicles, then 10 -12. There was a lot.” – says a resident.

Earlier the field was divided into squares, here the expert gasman conducted seismic studies and measurements and were preparing to install a rig.

Local mechanics and welders were not hired, because many of the them spoke out against the extraction of shale gas. The residents of Shishkovo were not notified of the purpose of the camp. The camp was staffed mainly with residents of Western Ukraine, which is revealed by the documents left behind : “Ivano-Frankovsk, Cherkassy, Poltava region, Zhitomir region.”  The documents also mention both gas and oil research.

According to the paperwork for 2013 found onsite, similar bases were also located in villages Shevchenko, Raigorodka and Gerasimovka.

According to the shift schedule in this trailer lived 10 employees of a Kiev company Nadrogru, and looking at this map of the camp, habging inside the trailer, we are now in a trailer number 33, and looks like some equipment and trailers were taken away from this base.

As the local residents say, the research continued until the Ukrainian national guard had left. Along with tanks and howitzers the Ukrainian soldiers also took part of the seismic equipment, but in the rush they did not have the time to gather everything.

This abandoned base can be observed well from the Ukrainian side of the frontline. Just over this field, a mile from the abandoned base is the town of Schastye, which is under the complete control of the Ukrainian army. Even now, in the midst of a ceasefire it is not safe to be here. Locals say that during evening hours the Ukrainian Armed forces and volunteer battalions begin to fire at each other.

Now we know that US weapons intended for Ukraine are actually intended to defend US energy interests, and the weapons are simply needed to silence the annoying Russian locals, who dare to speak out against the destruction of local ecology, the profits from which no one even planned to share …

Video with English subtitles by Kazzura (resolution not as good)