Congratulations to the people of the Donbass for this amazing accomplishment! 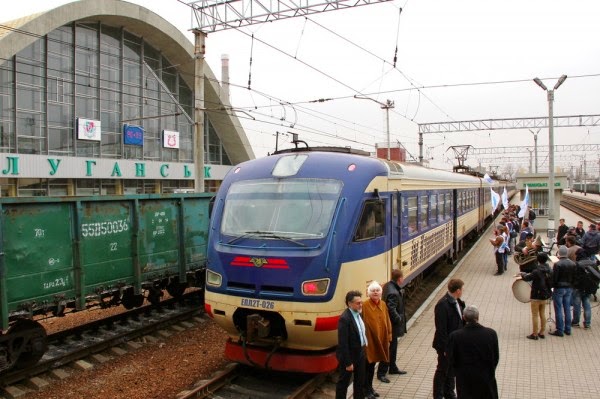 There are good news, which somehow went unnoticed. But actually it is very important. Because it marks a new life of Donbass, its rebirth. The first steps of peaceful development.

I am very glad that the rail service between Donetsk and Lugansk has been restored. I remember when I was in Novorossia, in order to get to Donetsk from Lugansk and Alchevsk, we had to loop around narrow bypass trails in the dark of the night in a minivan – from checkpoint to checkpoint. Hoping that we won’t make the wrong turn and stumble on the ukro-punishers. 🙂 Under the seat layed the two “Mukhi”, on the seat – the AK. The feeling was unforgettable. But now Debaltsevo is free. And the direct way is open.

“On March 28 from Yasinovataya-Passazhirskaya station departed the first train in 8 months, connecting Donetsk and Lugansk People’s Republics. It departs 3 times a week through the stations Yenakiyevo, Debaltsevo, Rudakova and 14 other settlements with the last stop in Lugansk at 13.30.”

And this is not a small thing. This is a huge, hard work of thousands of people. And those who freed Debaltsevo, and those who restored the rail communications and power lines.

“In response to another statement of the ATO spokesman Lysenko that UAF will leave us a “lunar surface”, and as directed by the head of the Donetsk People’s Republic, Alexander Zakharchenko, we are ready to lay the railway on the “lunar surface”, which is left after the Ukrainian army.”