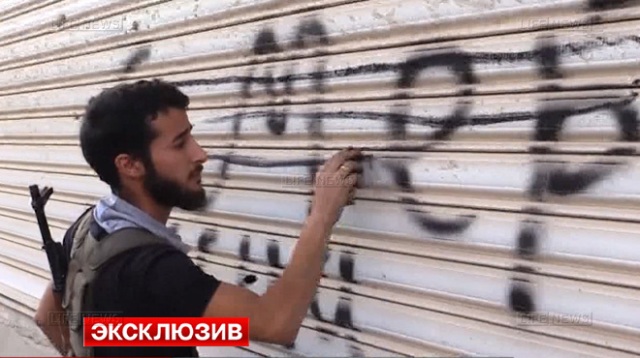 In one of the suburbs of Damascus, once captured by ISIS militants, Syrian government troops have discovered inscriptions on the walls in Russian and Arabic, with threats against Russia.

The Syrian military explained that on this street in Daraya there were once positions of terrorists, who came from the North Caucasus. The soldiers of the government army read and translated Arabic inscriptions.

“First, we will destroy Syria, then Russia, and then we will get to China”, – translated the soldiers to the special war correspondent of LifeNews.

In turn, our production team has translated the inscription for them in Russian because they don’t know the Cyrillic alphabet. The inscription “Death to Russia” aroused the indignation of the government soldiers, and the soldiers immediately crossed out the word “death”.

Note that the Syrian army is not only repelling the attacks of the extremists in the South Eastern suburbs of Damascus, but on some parts of the front is conducting offensive operations.

— Thanks to the concerted actions of the Russian military-space forces and the Syrian army on the ground, and as a result of point strikes inflicted on the front line we moved forward. The radicals are now trying to relocate and organize ammunition depots not on the frontline but in the deep rear, — said the major of governmental forces, Khalil.