Top defense contractors reassured investors at a conference in Florida that they are poised to benefit financially from the escalating conflicts in the Middle East and Africa, according to a leaked tape.

Last week, Lockheed Martin Executive Vice President Bruce Tanner gave a speech at a Credit Suisse conference in West Palm Beach where he praised the “indirect benefits” that defense contractors and their shareholders would see as the result of the escalation of the conflicts in Syria, such as Turkey’s recent shooting down of a Russian jet. The Intercept obtained a recording of the speech.

That incident would lead to a greater potential for US involvement and would cause “an intangible lift because of the dynamics of that environment and our products in theater,” Tanner told investors. He also said that the Russian activities against Islamic State (IS, formerly ISIS/ISIL) with the US would stimulate demand for Lockheed Martin’s F-22 and new F-35 jets.

He added that the demand for “expendable” products like rockets has increased from Saudi Arabia and the United Arab Emirates because of the involvement of those countries in Yemen’s civil war.

The Intercept reported that Oshkosh president Wilson Jones, in another speech at the conference, said that with the threat of IS growing, “there are more countries interested in buying Oshkosh-made M-ATV armored vehicles.” He said that a recent business trip to the Middle East showed that many countries had expressed an interest in mechanizing their infantry forces.

Raytheon CEO Tom Kennedy added his voice to the chorus, saying that his company was seeing a significant uptick in demands for “defense solutions” from several countries in the Middle East.

While terrorist attacks usually lead to bad results for the stock market, defense contractors’ share prices soared following the November terrorist attacks in Paris that left 130 people dead. On the Monday after the attacks, Lockheed Martin traded 3.5 percent higher, Northrop Grumman was up 4.4 percent, and Raytheon saw a 4 percent boost. 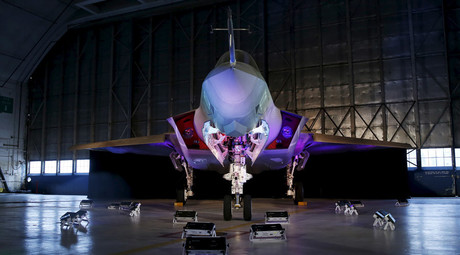