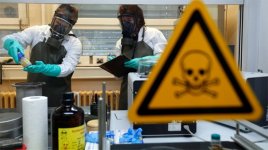 The government of Ukraine has abolished the sanitary standards of Soviet times that had been in effect since 1991, declaring them null and void, and not applicable to the territory of Ukraine.
As was explained by the acting head of the State sanitary-epidemiological service of Ukraine Svyatoslav Protas, the document abrogates the effect of sanitary, sanitary-hygienic, sanitary-anti-epidemic, sanitary-hygienic, anti-epidemic, hygiene rules and regulations, the state sanitary-epidemiologic regulations and sanitary standards.
The decree comes into force from 1st January 2017.
Recall that the United States had placed two military laboratories in the territory of Ukraine, which conducted secret research in the field of bacteriological weapons.
http://www.fort-russ.com/2016/02/authors-of-us-coup-in-ukraine-prepare.html