Does Germany still owe Greece billions of euros in compensation for Nazi crimes in World War Two, or should bygones be bygones since Berlin has anyway given Athens billions as part of benefits and bailout measures?

Greece continues to demand about €270 billion from Germany in reparation payments for atrocities committed by the Nazi government during World War Two. Athens said it could take legal action against Germany to receive the compensation.

“Greece and its people will not forget the slaughter and war crimes of the Nazi army and demand tangible recognition by the German government. Greece will do whatever is necessary, mainly at a diplomatic level, and if necessary, at a legal [level],” Prime Minister Alexis Tsipras said earlier this week, during a visit to Kommeno to commemorate the victims of the 1943 massacre in the northwestern village, where Nazi troops killed 317 civilians.

RT sat down with political theorist Marina Prentoulis, member of Syriza, and Eike Hamer, a political commentator from Germany, to discuss whether Greece can really claim the money 70 years after the war.

Marina Prentoulis agrees it’s been a long time, but insists that one has to remember that “crimes against humanity never expire.”

“The people of Greece will always have to live with the memories of the Nazi occupation. I would like to say that [on August 17] in 1944 we had a very dark anniversary for Greece – the anniversary of Kokkinia, a place in the western Athens, where the same day many years ago 20,000 people were gathered at the local square – 350 of them were executed, and 800 of them were taken hostages, and they were tortured by the Nazi army and the Gestapo,” she said. 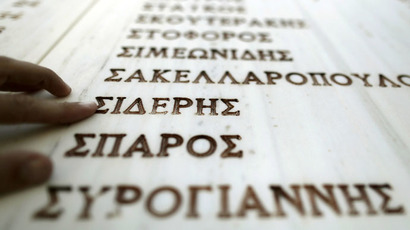 Eike Hamer argues, though, that the issue of fairness here is not the point, as “there is hardly any other country that has got as much money from Germany as Greece.”  He recalled that back in 1960, West Germany paid 115 million deutsche marks to Greece as compensation for Nazi war crimes. Now the main point is to “live together again in peace and with respect to each other,” he says.

That won’t be possible if one side “comes with old stories [over and over] again to blackmail the other one and to demand any money or whatever from them,” Hamer says. “We’re comrades in the EU, and this is insane to make a break through the population, by demanding such insane things.”

Prentoulis agrees that living in peace is crucial, but, she insists, “this is why we have a historical responsibility to the people of Europe to recognize how Greece was devastated by the Nazi occupation.”

As for the 1960 payment, she said, “it was only a fraction of the money that they were supposed to give to Greece.”

“And now it is time to recognize that as comrades and for the good of the whole of Europe in order to be able to put this story in history and remember the horrific things that happened to Greece with not wanting to do anything like that again in the future; for peace and prosperity of Europe,” said Prentoulis.

Since the 1960 compensation, Hamer argues, Greece has enjoyed advantages worth “a couple of hundred billion” euros. He referred to low interest rates, European – “mainly German” – aid and other indirect payments, including advantages Greece received because of having “many contracts” with Germany.

“There is no other country in the world paying Greece that much as Germany through the EU, through other things,” he said. 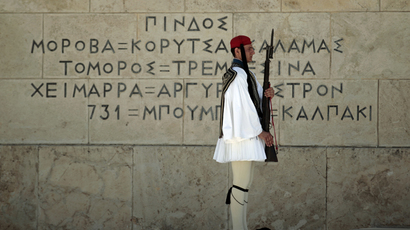 “It is funny that you can pay Greece as much money as you want and the elites divide this money amongst each other, take the money away, move to London, or whatever. Now, when the people are left behind from their own elites, they are demanding more money from Germany,” Hamer said, adding that “this is not fair.”

Prentoulis insists that it’s Greece that is being treated unfairly.

“Greece is getting one of the worst treatments across the Eurozone,” she said adding that economic issues and war reparation payment should be differentiated.

“But if you want to talk about the situation in Greece now, I have to remind you again about the 1953 London Debt Agreement, when a lot of countries, including Greece, decided to cut the debt of the German state by half and connect their repayment with a prosperity of the German state. This was an act of good will from the people of Europe,” she said.

Greece, however, is being treated differently now, says Prentoulis.

“The Greek people have been totally brought to the knees, once again because of austerity, because of the decisions of the conservative government of the EU, including the German one, and they are going on suffering since the crisis of 2008. You remember what happened with the Greek negotiations, and the whole Europe has been witnessing that,” she said.

The statements, views and opinions expressed in this column are solely those of the author and do not necessarily represent those of RT.