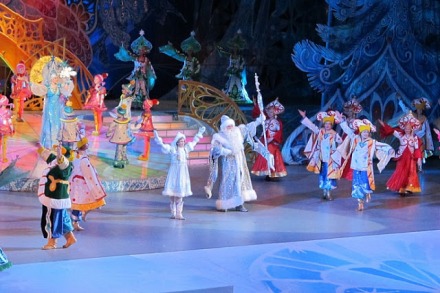 Putin chose not to expel American diplomats from Russia

Russia will not stoop to the level of “kitchen” diplomacy, said the President

Russian President Vladimir Putin has decided not to expel the US diplomats from Russia in response to the new Washington sanctions against Moscow.

“Russian diplomats returning home will spend Christmas holidays [Bet Obama didn’t know Russian Orthodox Christmas is on January 7 – FR] with family and friends at home. We are not going to create problems for American diplomats. We’re not going to expel anyone”, – read the statement of the Russian leader.

Putin added that Russia will not “prevent families and children of diplomats from using their usual vacation places during the New Year holidays”. [Obama banned the kids of Russian diplomats from going to their usual vacation retreats in USA – FR] “Moreover, all children of American diplomats accredited in Russia, are invited to the New Year and Christmas kids party at the Kremlin”, – said the Russian leader.

“Reserving the right to retaliate, we will not stoop to the level of irresponsible “kitchen” diplomacy and will build further steps for the restoration of Russian-American relations, which will be based on the policy to be conducted by the administration of President Donald Trump,” – said Putin.

“New unfriendly steps of the outgoing US administration we regard as provocative, aimed at further undermining Russian-American relations,” – he said.

“This is clearly contrary to the fundamental interests of both the Russian and American people, given the special responsibility of Russia and the United States for the preservation of global security, is detrimental to the entire complex of international relations,” – the President added.

“It is unfortunate that the Obama administration finishes its work in this manner, but, nevertheless, I wish him and his family members a Happy New year, – reads the statement of the head of state. – Happy New Year to the President elect Trump and the American people!”

“I wish you all happiness and prosperity!” – said the Russian leader.

The Obama administration introduced new anti-Russian sanctions that have affected some of the Russian companies, the FSB and Main Intelligence Directorate (former GRU) of the Russian General staff, and its senior management. In addition, the US authorities declared persona non grata 35 Russian diplomats and announced the closure of two facilities owned by Russia [used as retreats for kids of Russian diplomats – FR] in the states of New York and Maryland. Washington relates these steps to supposed hacker attacks on American political institutions, of which the current administration is accusing Russia [which exposed the DNC rigging US election, although the US intelligence community is not 100% certain, just as with Iraqi WMD’s – FR]

FR: Earlier the Russian Ministry of Foreign Affairs outraged by the expulsion of its employees recommended that Putin expel 35 American diplomats in a mirror response