This demonstrates that U.S. not just refuses to back down in its campaign against Syria, but instead is increasing in a hybrid warfare approach, with examples like Clooney’s film, the Academy Awards, and this concert in NY’s prominent Grand Central Station elevating the White Helmets. That open approach has advantages for peace and pro=Syria activists,  however — venues for educating the public about the situation there and the terrorist actions of the U.S. and its agents.

The U.S. government demonstrates that it is fixed on its course and will not stop until Syria is destroyed, utterly torn apart, and occupied by the West and its coalition partners. The iron fist inside the velvet glove — nothing has changed. Ignore the velvet glove, the smiles, the words of peace, the Hollywood approach; it is a magician’s trick, to distract while Syria is attacked.

While a full orchestra and choir, some wearing white helmets, pounded out Beethoven’s Ode to Joy against the backdrop of Grand Central Station in Manhattan on Friday, about a dozen anti-war activists protested the group’s presence.
–

Standing among the orchestra, anti-war activists held aloft signs that read “White Helmets are US Propaganda,”“No US bases in Syria,” and “This is US war agenda.” 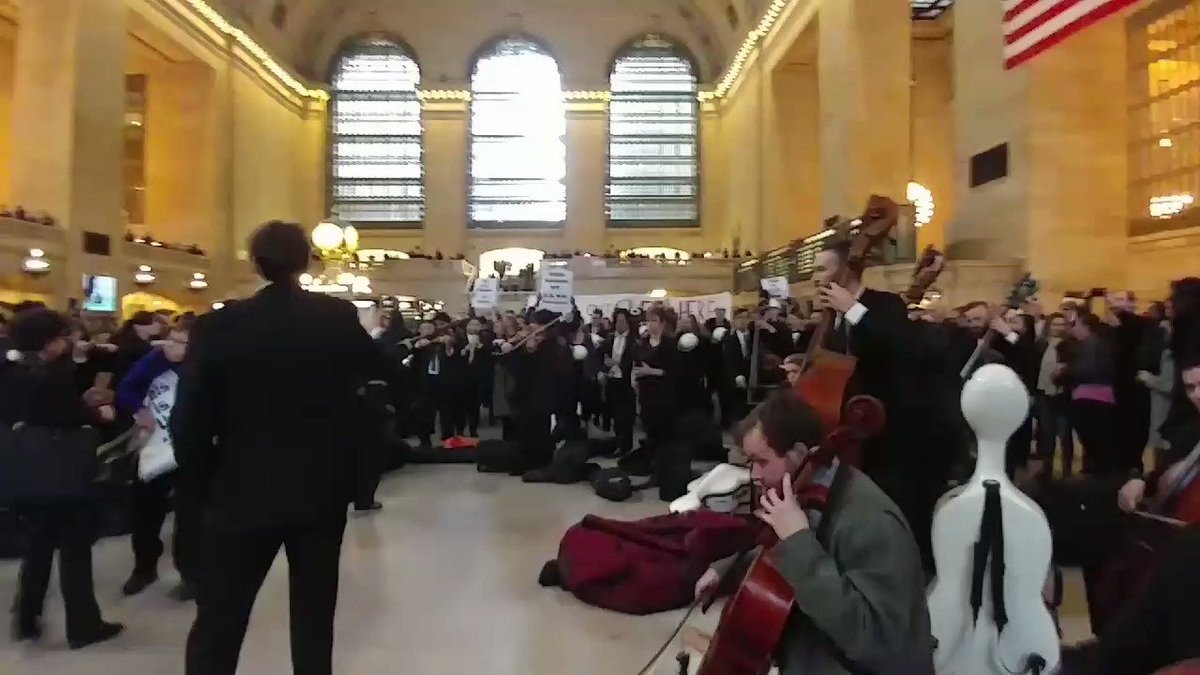 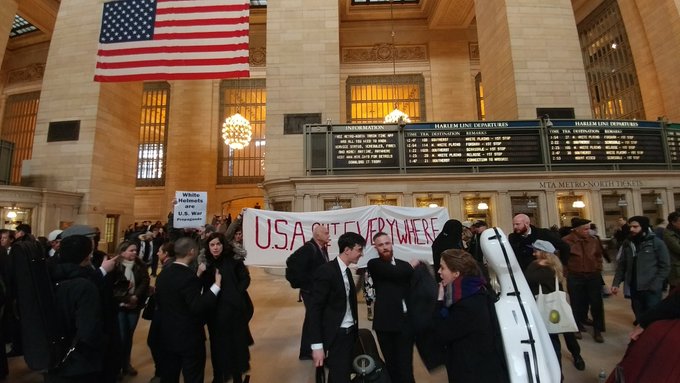 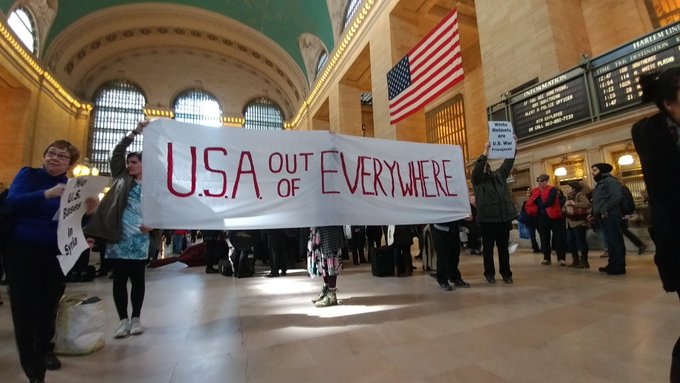 Anti-war activists unfurled a giant banner at the #WhiteHelmets pop-up concert at Grand Central reading: “U.S.A. OUT OF EVERYWHERE”

“We were there because the White Helmets are a PR effort for the US government to drum up support for intervention in Syria. We are opposed to US intervention in Syria and everywhere else, we thought it was important to protest this event,” an activist with Hands Off Syria told RT.

Activists refused to be identified because they’ve already faced harassment and lost jobs over their views on US involvement in Syria.

“It was bad, because they were taking a very beautiful and well-known music and basically trying to drum up war propaganda and sentiment to justify the war when in fact that the US has bases in Syria, the US has already invaded Syria, US is already responsible for the protracted war against the Syrian people. Half of the country are refugees,” Another activist told RT. “And they want to give you Beethoven’s Ninth [Symphony]. That’s sick.”

These are the fliers activists passed out as they disrupted the #WhiteHelmets at their pop-up concert at Grand Central pic.twitter.com/VG5iffjHiP 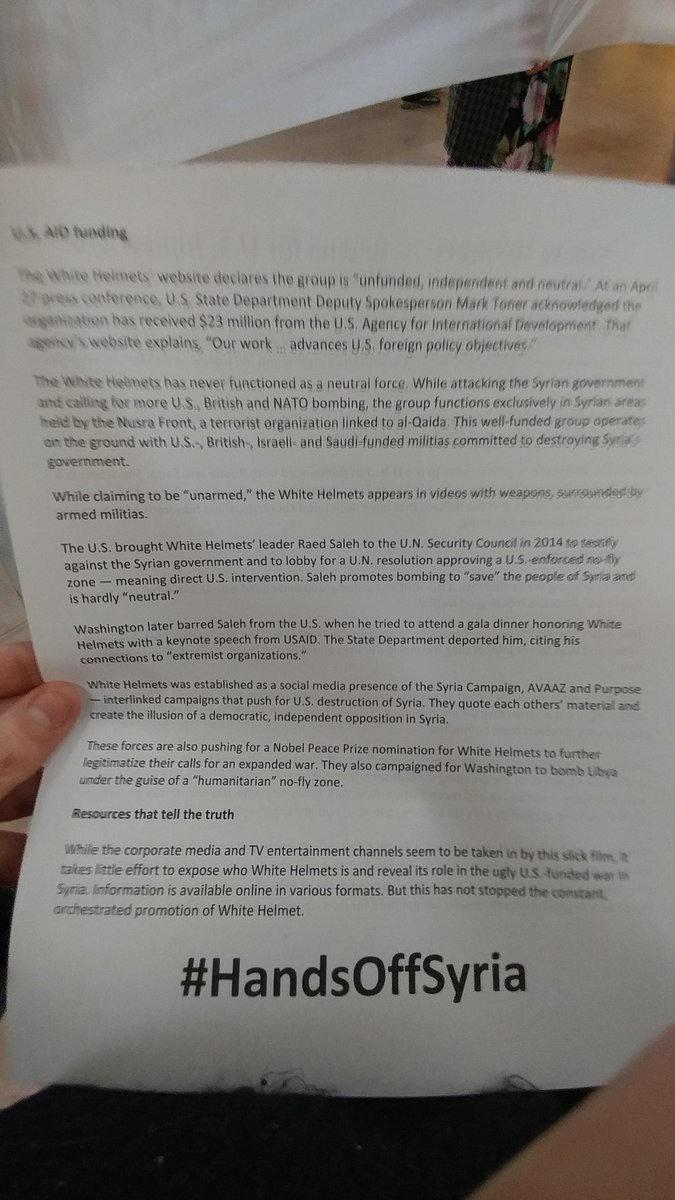 Activists who handed out leaflets about the White Helmets said three or four of the players in the concert felt used realizing what they were associating with.

Overheard the musician with the mohawk saying “I feel very used here” after talking with activists about the #WhiteHelmetspic.twitter.com/OAwUZne8Hj

A Netflix documentary promoting the work of the White Helmets just won an Academy Award, but the recognition comes amid growing controversy about the group and its alleged neutrality.

The group first gained notice when videos started being circulated showing men in white helmets assisting people in Syria, rescuing children and cleaning up bombed out sites in territories held by the rebels.

The appearance of the group’s activities coincided with the Russian government’s assistance to the Syrian Government in efforts to rid itself of Al-Qaeda. Russian intervention infuriated the Obama administration, which has sought regime change in Syria.

Since then, allegations have arisen that the White Helmets are little more than a propaganda effort funded by the US government.

“All you have to do is look at their funding source – which is the US government – specifically the USAID, and the UK foreign office have given tens of millions of dollars to this group which is run by the Syria Civil Defense, which is a PR firm,” independent journalist Rania Khalek told RT. “The purpose of all this is to push for regime change in the public sphere. To paint a narrative that pushes for escalation and military intervention in Syria. ”

In April 2016, the State Department admitted the US had mysteriously revoked the visa of White Helmets leader Raed Saleh over ties with terrorist groups, even as the group received $23 million in US taxpayer funds. Saleh was able to attend the Academy Awards in February after a federal court overruled the Trump administration’s travel restrictions on Syrians and residents of six other majority-Muslim countries.