This endangers the 19 nuclear reactors in Ukraine because the reactors rely on the electric grid for power to keep reactor cores and fuel rods cool. Without grid power and if there is no back-up power, reactors can explode and melt-down. Chernobyl had one reactor accident. Fukushima had 3 reactors melt down. 19 is unthinkable.

Beside the nuclear issue is the immense suffering of the Ukrainian people due to the energy shortage and the high costs imposed by the Kiev regime on the population for the energy they get. How many in Ukraine have died indirectly from this or actually frozen to death this winter? Will we ever know?

The organizers of the trade blockade in eastern Ukraine threaten to block all coal imports from Russia.

KIEV (Sputnik) — The organizers of the trade blockade in eastern Ukraine said Friday that they would block all coal imports from Russia beginning from April 2 in case Kiev failed to reach agreements on coal shipments from other countries by that time.

He added that beginning from April 2 the observation stations of the blockade organizers, which are to be established along all the railway transition posts, will begin the blockade’s active phase.

“First of all we will not let coal from Russia pass,” Vynohrodsky pointed out. 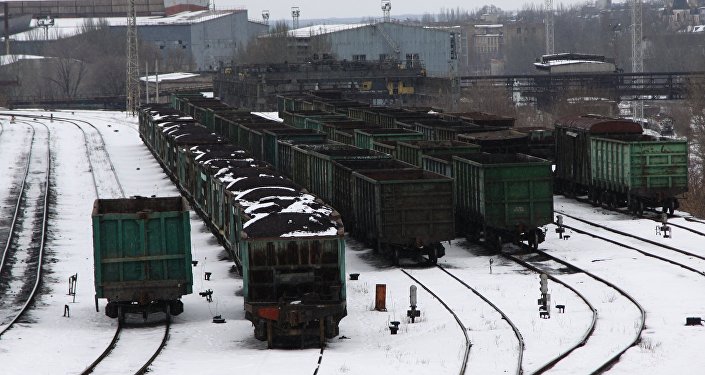 Vynohrodsky noted that concerning other supplies from Russia, the blockade organizers would “consult with the Ukrainian people.”In late January, a group of former participants of Ukraine’s military operation in Donbas, including several lawmakers, blocked traffic on several segments of freight rail lines running from the territories uncontrolled by Kiev. The blockade led to irregularities in supplies of anthracite coal from Donbass, leading to power shortages in Ukraine and prompting Kiev to declare an energy emergency.

Kiev’s authorities criticized the actions of the blockade organizers saying that coal shipments from Donbass were legal as coal producing plants located there had been paying taxes to the Ukrainian State Treasury Service. However, no efforts have been undertaken by the Kiev authorities to lift the blockage.

In January 2015, the Ukrainian parliament adopted a statement designating Russia as an aggressor country, as Kiev considered Russia being a party to the military conflict in Donbass. No evidence supporting this statement was provided.

Moscow denounced the statement. Russia repeatedly said it was not part to the Ukrainian conflict, had not provided military equipment to Donbass militia and was interested in the settlement of the Ukrainian crisis.