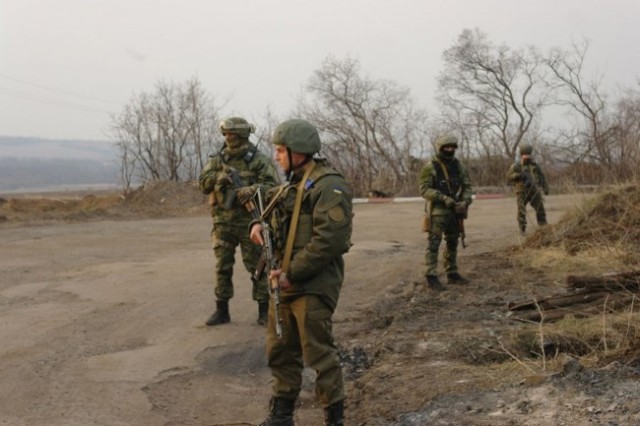 All roads and railway lines leading to the frontline in Donbass have been cut off by the Ukrainian National Guard, National Police, and State Border Guard Service.
More than 800 troops have been deployed to checkpoints on the Ukrainian side of the frontline in Donbass. The blockade checkpoints are reportedly being reinforced with military vehicles.
“Pursuant to the decision of the National Security and Defense Council of Ukraine, today all roads and railway lines leading to the demarcation line have been blocked by forces of the National Guard, National Police, and border guard services in order to ensure control over and prevent the illegal movement of goods,” the National Guard’s statement reads.

This escalation comes on the heels of Ukrainian President Poroshenko’s ultimatum to the Donetsk and Lugansk People’s Republics to reverse the nationalization of Ukrainian enterprises.
This new Kiev-enforced blockade follows the recently dispersed blockade of Donbass railways by neo-Nazi battalions who demanded that all trade with the Donbass republics be terminated. The government’s failure to suppress the latter initiative on the demand of the Donbass republics provoked the nationalization of hitherto undisturbed Ukrainian enterprises on the territory of the people’s republics.
Poroshenko has since named the conditions for the blockade’s lifting:
“We say: please return enterprises to Ukrainian owners…comply with points one and two of the Minsk Agreements, meaning cease-fire and withdraw heavy equipment and artillery, and we’ll remove the restrictive measures on the movement of goods across the contact line,” the president stated.
In addition, Poroshenko threatened to impose sanctions on Russia if Donbass sells goods manufactured at the recently nationalized factories to Russia.
Meanwhile, the head of the Donetsk People’s Republic, Alexander Zakharchenko, has dismissed the blockade as Ukraine’s “own domestic problem.”
“The decision of Porsohenko and the National Security and Defense Council is the internal affair of former Ukraine. More precisely, this is a fact of internal power struggle in Kiev which Poroshenko seems to be losing. We don’t have any relationship to this whatsoever,” Zakharchenko stressed, adding that Donbass has its own blockade in force which will be lifted only when Kiev fulfills its part of the Minsk Agreements.
http://www.fort-russ.com/2017/03/ukrainian-national-guard-blocks-all.html