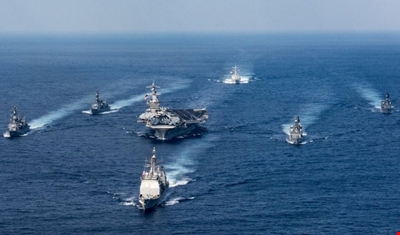 An American aircraft carrier was dispatched towards the Korean Peninsula, due to an alleged nuclear threat posed by North Korea.
The move has since been confirmed by Dave Benham, the spokesman for the US Pacific Command, who said that the Carl Vinson strike group is “taking necessary precautionary measures”, adding that “the main threat in the region is still North Korea, mainly because of its nuclear programme and a continuous reckless and irresponsible research in order to acquire nuclear weapons.”
The group includes the USS Carl Vinson aircraft carrier from the Nimitz class, alongside fleet of missile launchers, destroyers and bombers.
Previously, North Korea conducted five nuclear tests, two of them in 2016. Satellite images are believed to be indicating that Pyongyang may be ready to conduct a sixth one in the nearby future.
While meeting his Chinese counterpart Xi Jinping on Thursday and Friday, the US President Donald Trump also discussed the North Korean nuclear ambitions and threatened of possible unilateral measures against Pyongyang, should the latter not give up his nuclear programme.
On Saturday, North Korean government condemned the US strike on Syria, calling it “an unacceptable act of aggression.”
“The reality of events today proves that we are facing an aggressor and, for the millionth time, confirms that our decision of strengthening our nuclear programme is the very right one”, an unnamed spokesman for the North Korean Foreign Ministry was quoted saying.
On Friday, the US Secretary of State Rex Tillerson “warned” that his country alone could go in war with North Korea.
http://www.fort-russ.com/2017/04/afraid-of-its-nuclear-ambitions-us-sets.html