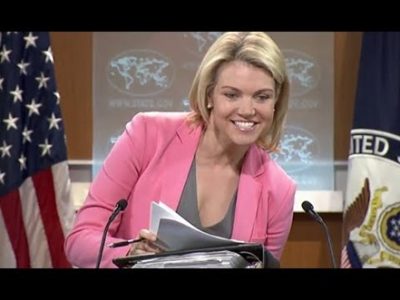 State Department Spokesperson Heather Nauert released a statement today warning the Syrian government to cease and desist from its final military push against ISIS and al-Qaeda groups in southwest Syria. The United States is “deeply troubled by reports of increasing Syrian regime operations in southwest Syria” because such operations are within the “de-escalation zone negotiated between the United States, Jordan, and the Russian Federation last year and reaffirmed between Presidents Trump and Putin in Da Nang, Vietnam in November,” the statement says.What a strange warning. The United States, which illegally occupies territory of a country nearly 6,000 miles away, is warning Syria, the country it partly occupies, not to conduct military operations against terrorist organizations within its own borders!

Aside from the absurdity of Nauert’s press release, there is the important matter that the whole statement is a lie.

First, the “deconfliction zone” to which she refers has been unilaterally declared by the United States. Syria never agreed to cease military operations within its own borders. Suggesting that Damascus is violating some agreement when it was never party to the agreement is shockingly dishonest.

Second, even the “de-escalation zones” agreed between Russia, Iran, and Turkey in Astana, Kazakhstan, in May, 2017, exempted UN-recognized terrorist groups from the deal. So even if Syria was a party to the US-claimed “de-escalation” agreement, its current advance on ISIS and al-Qaeda controlled territory would not be a violation.

Obama to Announce Major US Escalation in Syria

Third, the State Department’s claims on the “Da Nang” agreement between Presidents Putin and Trump are purposely misleading. The very first sentence of the “Da Nang” statement affirms the two leaders’ “determination to defeat ISIS in Syria,” demonstrating the high priority placed on fighting ongoing terrorist occupation of parts of Syria.

So why now, seven months later, is the US warning Syria against completing the very task that Trump and Putin made a top priority?

Also, the “Da Nang statement” discusses the “de-confliction” areas explicitly in the context of the fight against ISIS:

The Presidents agreed to maintain open military channels of communication between military professionals to help ensure the safety of both US and Russian forces and de-confliction of partnered forces engaged in the fight against ISIS. They confirmed these efforts will be continued until the final defeat of ISIS is achieved.

So, again, why is the US objecting to the Syrian government’s actions to achieve a goal — defeat of ISIS — reiterated by the US government?

The “Da Nang” statement also made it clear that when it comes to Syrian territory, that country’s sovereignty must be respected:

How can the US be committed to Syria’s sovereignty when it violates that sovereignty by occupying Syrian territory and warning the Syrian government against attacking al-Qaeda and ISIS-dominated areas of Syria?

The United States — which maintains hundreds of US troops illegally in Syria — warns Syria about conducting military operations within its own borders against internationally-recognized terrorist groups, citing the “Da Nang” agreement, which:

…reinforces the success of the ceasefire initiative, to include the reduction, and ultimate elimination, of foreign forces and foreign fighters from the area…

But those “foreign fighters” they agreed to eliminate by definition must include the US military itself! So actually it is the US that is violating the agreement by remaining in Syria, not the Syrian government by fighting al-Qaeda!

As an astute colleague wrote today,

“have also been rumors in Washington that the Administration is preparing for something ‘big’ in Syria, possibly related to warnings from the Pentagon that Syrian forces have been threatening the unilaterally declared “de-escalation zone” in the country’s southeast.”

Nauert’s release may be one big lie, but the US threat against Syria is looking to be deadly serious.

Featured image is from the author.