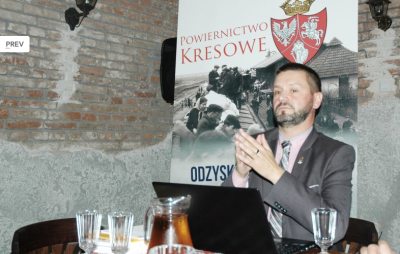 On October 16, 2015, the Polish organization “Powiernictwo Kresowe” (Borderland Trusteeship) held a meeting at the headquarters of the Association for Polish-Eastern Cooperation in Wroclaw, Poland to discuss legal problems arising from the annexation of Poland’s eastern lands, the “Kresy,” by Soviet Ukraine, Belarus, and Lithuania in 1939 and Ukraine’s new EU association agreement.
The open, informational meeting, led by Konrad Rekas, was attended by more than a dozen people and featured a presentation of Powiernictwo Kresowe’s mission, legal plans, and an open Q&A session.
Rekas opened the meeting by explaining that the organization seeks to legally assist those Poles who have not received recompense or restitution for property lost during the repatriation of Poles and annexation of Poland’s Kresy around the time of the Second World War. According to bilateral agreements at Yalta and Potsdam in 1944 between the Polish state and the Ukrainian Soviet Socialist Republic, the Polish state settled to reimburse Ukrainians for their lost property and repatriation to the USSR, and the Ukrainian state agreed to do the same for Poles, of which approximately 1.2 million were affected. However, for a number of political and economic reasons, in the past 71 years, a large portion of Poles have yet to receive any sort of the promised reimbursement. According to the organization, the total sum of potential restitution reaches up to 5 billion US dollars and up to 120-150,000 Poles are entitled to file claims.
Since the 1990’s, there have been numerous legal cases filed and brought before the Constitutional Court of Poland and the European Court of Human Rights, but most cases have been rejected, and on December 4, 2015, the Polish constitutional court resolved that those affected have the right to only 15% of the current value of their lost property. Considering further the complications of dealing with Ukrainian judiciary organs, many have failed to achieve anything at all.
Powiernictwo Kresowe has launched an initiative to gather the data and documents of those Poles still demanding restitution, and legally assist them in filing cases with Ukrainian, Polish, and, if necessary, European level courts.
According to Mateusz Piskorski, a major proponent and political ally of the initiative, while precedent shows that the Polish state will avoid aiding such cases and has rejected many of them in an effort to maintain good relations with Kiev, there are no legal grounds for prohibiting individuals from opening lawsuits. Piskorski discussed this in greater detail in a recent interview with PolitNavigator.
The launch of this initiative comes on the heels of Ukraine’s signing of the EU association agreement, whose provisions included recognition of the need to settle property and heritage disputes with other states and individuals. Yet, in signing the same agreement, Ukraine simultaneously failed to take into consideration earlier resolutions, particularly agreements with Poland, on restitution issues dating from the Second World War.
Following the presentation, a lively Q&A session included individual participants’ retelling of their stories and legal qualms over achieving restitution for their families.
When asked why Powiernictwo Kresowe has no intentions of filing such special cases against Belarus, Rekas explained that Belarus has not signed any European association agreements which distort or annul previous, historical accords.
In response to another frequently asked question concerning whether or not contemporary Ukraine can be held responsible for the actions and agreements carried out under the auspices of the USSR, Rekas reminded that it was the Ukrainian Soviet Socialist Republic itself, a full member of the UN, which signed such agreements with Poland, and that, taking into consideration the territorial and other dimensions of the Ukrainian SSR which the contemporary Ukrainian state inherited, it is the rightful successor state to the Ukrainian SSR.
While the initiative of Powiernictwo Kresowe might appear to be restricted in importance to the individual legal cases of various sizes which it will aid, the demand of ordinary Poles’ for historical justice over Ukraine’s annexation of the Kresy carries significant geopolitical weight. As some analysts have suggested, the further collapse of the post-Maidan Ukrainian state might cause a vortex into which neighboring, traditionally connected states will be pulled, each bringing their own historical and geopolitical interests to the table. Poland’s potential interests in regaining or re-establishing influence in the Kresy, where Polish majorities and minorities were not only expelled but also subjected to genocide at the hands of Ukrainian Banderites, cannot be ruled out. As Piskorski stated in his interview with PolitNavigator, everything depends on the point of view of historical justice of the actors and their separate interests involved.
Organizations such as Powiernictwo Kresowe could play a lively, grassroots role in affecting, influencing, and possibly precipitating such a development, as well as possibly aid in draining Poroshenko’s blood-money budget.
(Pictures from the meeting are to follow upon official release)
http://fortruss.blogspot.com/2015/10/wheres-my-grandfathers-farm-poles-seek.html
Follow Free Ukraine Now on WordPress.com