Joe Shumate, Richard Dresner, and George Gorton were three of the main U.S. political operatives in this scheme. Dick Morris was also involved and was the liaison with President Bill Clinton. Details below.

For the past nine months, the Democratic Party and what passes for the liberal media have been spearheading a neo-McCarhtyite campaign backed by powerful sections of the US intelligence apparatus and based on unsubstantiated allegations that the Russian government and President Vladimir Putin interfered in the US presidential election.

Trump is being presented by these forces as a political stooge of Putin, with Moscow routinely labeled a “hostile foreign power.” This contrived scandal has been bolstered by FBI and congressional inquiries organized to investigate claims that the Trump election campaign colluded with the Russian government to damage the campaign of Democratic candidate Hillary Clinton and tip the election to Trump.

Behind this political witch hunt is a ferocious struggle over US imperialist foreign policy, centering on opposition to Trump’s inclination to seek improved relations with Russia and shift, at least for the present, from the virulently hostile and aggressive policy toward Moscow carried out by the Obama administration.

To fuel this campaign, the public has been inundated with sanctimonious expressions of horror and shock that a country would seek to manipulate elections taking place in another country. Republican Senator John McCain described Russia’s alleged meddling in the 2016 US presidential election an “act of war.” Last week, in his testimony before the Senate Intelligence Committee, fired FBI Director James Comey said of Russia, “they will be back… they are coming for America.”

The presentation of the US electoral system as a model of democracy is a transparent fraud. It is system that legally sanctions the buying of candidates, parties and elections by a super-rich financial oligarchy. Moreover, the Democratic Party emails allegedly hacked and leaked by the Russian government documented real, and illegal, manipulation of the electoral process, in the form of efforts by the Democratic National Committee and the Clinton campaign to sabotage the campaign of Bernie Sanders for the party’s presidential nomination.

When it comes to manipulating foreign elections, the American ruling elite and its media and political stooges know whereof they speak. The United States is the world leader in interfering in other countries’ elections. Professor Dov Levin of Carnegie Mellon University has assembled a database documenting as many as 81 occasions between 1946 and 2000 when Washington interfered in elections in other countries. This number does not include military coups or regime-change efforts following the election of candidates the US opposed, as in Iran, Congo, Guatemala, Chile and many other nations.

In fact, the number of countries whose elections have been affected by US meddling is much higher. There is scarcely a country, large or small, where the CIA, the State Department, the Pentagon or their various nongovernmental agencies, including the AFL-CIO, have not intervened in an attempt to obtain the election result desired by Washington. This includes nominal “allies” such as Canada, France, Germany, Italy, Britain, Australia and Japan.

One fairly recent election stands out for the brazen and open manner in which the United States government, directed from the White House, intervened to put its candidate in office in a foreign land. The targeted country was none other than Russia.

In 1996, the White House and President Bill Clinton personally mounted a massive campaign to secure the reelection of Boris Yeltsin, whose comprador regime had been installed in the first place to oversee the dissolution of the Soviet Union and restoration of capitalism. One of the ironies of the current contrived scandal over alleged Russian intervention in the 2016 election is the fact that the supposed victim, Hillary Clinton, is the wife of the president who oversaw the very real interference by Washington in the Russian election 20 years earlier.

By the time Yeltsin announced in early 1996 that he would be running for a second term in the presidential election scheduled for that summer, he had become one of the most despised figures in Russia, having presided over the catastrophic consequences of the privatization of the Russian economy. The impact included a GDP decline of 50 percent, hyperinflation, rampant corruption, skyrocketing violent crime, the collapse of medical services, food and fuel shortages, nonpayment of wages and pensions, and a plunge in life expectancy. Added to this toxic mix was Yeltsin’s highly unpopular war with Chechnya.

By late 1993, these policies had provoked such massive opposition that Yeltsin, by means of a dictatorial decree, dissolved the parliament. In response, opponents in Moscow took over government buildings. To put down the rebellion, Yeltsin, using critical intelligence provided by Washington, called out the military, shelled the parliament building and in the ensuing bombing and shooting killed an estimated 2,000 people. This was the supposed hero of democracy whom the United States backed in the 1996 election.

The oligarchs and generals who supported Yeltsin urged him to cancel or postpone the election, fearing that Gennady Zyuganov, the right-wing nationalist leader of the Stalinist Communist Party, would win. Instead, US political operatives were sent to Russia to rescue Yeltsin from likely political defeat.

Far from concealing this intervention, the American ruling elite boasted of its success after Yeltsin’s victory. Time magazine made it the cover story of its July 15, 1996 edition. 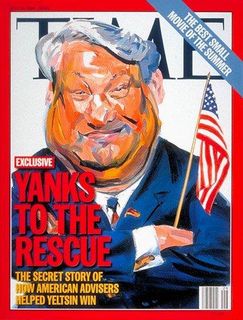 The ten-page article detailed the behind-the-scenes operations of three American political operatives who helped Yeltsin achieve a victory “that will keep reform in Russia alive.” The three Americans were Joe Shumate, George Gorton and Richard Dresner.

George Gorton was a Republican political consultant who served on the national campaigns of presidents Richard Nixon, Gerald Ford and Ronald Reagan. Besides his work on Yeltsin’s campaign, he helped lead national political campaigns in Panama, Romania, Czechoslovakia and Canada. As the national college director for the Committee to Reelect President Nixon, he was implicated during the Watergate scandal for paying students to infiltrate antiwar groups.