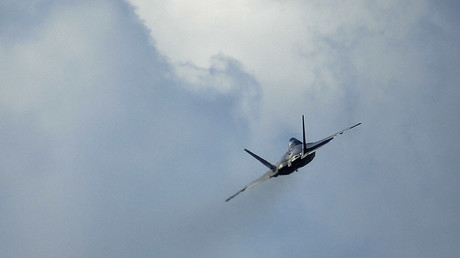 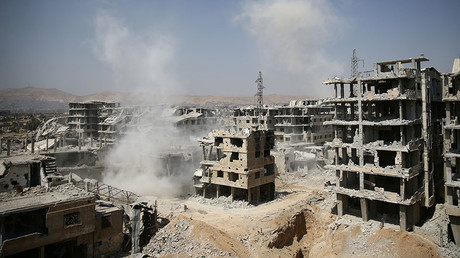 WASHINGTON DC, USA – In a major development, the US’s Central Command (Centcom) has just released an official statement, claiming that it has conducted an aerial attack on what it terms ‘Syrian pro-regime’ forces, about eight miles east of the Euphrates river.

The attack was strategically important for the US as control by the legal and duly elected Syrian government would allow it to link Syria and Lebanon via Iraq to Iran.

The statement continued: ” In defense of Coalition and partner forces, the Coalition conducted strikes against attacking forces to repel the act of aggression against partners engaged in the Global Coalition’s defeat-Daesh mission.”

It should be noted that the language used by Centcom greatly obfuscates the legal framework of this conflict. The US is operating illegally, with an overt invasion force, and also continues to fund and direct a side in what it frames as a civil war .

While many international legal experts, as well as the Syrian government have concluded that the war in Syria is a US and ‘Coalition’ backed invasion, it is nevertheless also illegal to fund or control a side in a civil war, which is what the US claims it is doing. The US also claims this alongside its phantom war against its own ISIS creation.
Thus, any attack by the SAA and it’s allied fighting groups upon an illegal, internationally backed, terrorist or otherwise ‘militia’ group existing on the territory of Syria, can not rationally be described in any existing framework as either ‘aggression’ or ‘unprovoked’.

Centcom claims that US bombers struck ‘pro-regime forces’. This is the area where there have been successful Syrian military advances because the US created ‘Syrian Democratic Forces’ (SDF) moved out. The SDF is a rebranding of some of the US backed Kurdish forces which are operating in areas which include sizable Arab populations.

As we reported previously, Kurdish-led and US backed forces have deployed elsewhere to fight Turkish backed forces.

It is unclear at the time of publishing whether these ‘pro-regime forces’ were auxiliary militias, or the Syrian Arab Army itself. FRN still awaits confirmation on more reliable details from the officials of the SAA. Centcom official statements are historically inaccurate and rife with factual ambiguities and legal untruths.

Diplomatically, and legally, this difference – whether the SAA or allied militias were attacked – may result in a different response from the Syrian government, and its allies in the conflict: Iran and Russia.

In either event, this represents another major escalation in the US’s growing and direct role in the conflict which it has supported through various proxies since the start of this decade.

This story at the time of publishing, is still developing.

A U.S.-backed operation near Raqqa aims to “block any advance by Syrian government forces from the west”. The Balkanization of Syria begins

The road to Raqqa is now blocked by U.S. forces and their allies. The chances that Raqqa (and the surrounding region) will be returned to Syria are now slim to none. Foreign armies and their proxies are sharpening their carving knives.

U.S. Special Forces and Syrian Kurdish and Arab fighters have just captured a “strategic air base” from Islamic State in northern Syria; in doing so, they have also “blocked” the advance of the Syrian Army as it approaches Raqqa from the west:

The Kurdish-led Syrian Democratic Forces (SDF) announced on Sunday that they captured the Tabqa air base, 45km west of Raqqa, the Islamic State of Iraq and the Levant (ISIL) group’s de facto capital in Syria.

Earlier this week, US forces airlifted SDF fighters behind ISIL lines to allow them to launch the Tabqa assault, and on Friday the alliance reached one of the dam’s entrances.

SDF forces were within 10km of Raqqa from the north, and aimed to effectively surround the city before launching an assault.

But as RFE/RL quietly notes:

Besides recapturing the dam, SDF said the U.S.-backed operation also aimed to block any advance by Syrian government forces from the west.

The landing forces airdropped into Syria seized four small villages in the area west of Tabqa and cut a main highway that links the provinces of Raqqa, Deir al-Zor, and Aleppo, Scrocca said.

The SDF cut the last main road out of Raqqa earlier this month, narrowing in on the city from the north, east, and west.

The only way in or out of Raqqa now is over the Euphrates River that borders the city to the south.

Incredible, isn’t it? A foreign army that is illegally operating in a sovereign nation can just march in and cut off the legitimate army of said sovereign nation from liberating its own city from terrorists.

What a world — and so much for international law.

It will be interesting to see Moscow’s reaction. Was this always part of the “deal” in Syria? Or is Washington hoping that Syria, Iran and Russia will accept Raqqa’s U.S.-ordained fate?

The US-baсked Syrian Democratic Forces, predominantly Kurdish YPG units, have been developing an advance in the eastern countryside of the ISIS self-proclaimed Syrian capital of Raqqah.

The decision to flank the ISIS stronghold from eastern direction followed a failed attempt of the US Special Forces and some SDF units to infiltrate the area of the strategic Tabqa dam.

De-facto, this meant that the US-led forces were not able to achieve their strategic goal west of Raqqah. However, the SDF announced the end of the 2nd and the start of the 3rd stage of the Operation Wrath of Euphrates.

The goal of the 3rd stage is to further isolate the ISIS-held city, including seizing the road to Deir Ezzor. If the SDF captures the road, ISIS units in Deir Ezzor will be cut off from their allies in Raqqah. This will decrease significantly the terrorist group’s ability to redeploy reinforcements from one front to another. Nevertheless, this is under a big question. The US strategists are well known due to their will to keep open exit roads for ISIS terrorists in besieged cities in Syria and Iraq. If the road remains open, ISIS units will likely flow from Raqqah to Deir Ezzor, escalating confrontation with the Syrian army in the besieged city.

While the new US administration is considering a new plan of the Raqqah operation, SDF representative, Rojda Felat, has already claimed that the SDF will need more heavy military equipment, including battle tanks, to storm the city. In other words, the YPG wants to get more equipment to increase its military capabilities. But this doesn’t mean that the group will throw all what it has to storm Raqqah.

Indeed, the fate of Raqqah depends on the decision of the US administration on the issue. Earlier this month, Lieutenant General Jon Davis emphasized that the US would need not only additional airstrikes.

There are already between 300 and 500 US Special Forces troops and unknown number of French and German special forces. This number will likely be increased to retake the ISIS capital in Syria. It could indicate that the Pentagon is going to involve US and NATO forces during the operation, repeating the Mosul case. The real role of the SDF is now unclear. In any case, its goal will be to show that its “local Syrian forces” storm the ISIS stronghold.

If you’re able, and if you like our content and approach, please support the project. Our work wouldn’t be possible without your help: PayPal: southfront@list.ru or via: http://southfront.org/donate/ or via: https://www.patreon.com/southfront