“…witness a sick and dangerous hobby that is targeting world peace and the security of mankind as a whole.”

The mushroom cloud of the first test of a hydrogen bomb, “Ivy Mike”, as photographed on Enewetak, an atoll in the Pacific Ocean, in 1952, by a member of the United States Air Force’s Lookout Mountain 1352d Photographic Squadron. © Reuters / Reuters
–
The deputy speaker of the Russian State Duma says the US Congress is “transfixed on war and destruction,” after it issued an order to evaluate the ‘survivability’ of Russian and Chinese leaders in the event of a nuclear exchange.

“This is a maniac order, made by people who are obsessed with the ideas of war and destruction and who want to find satisfaction in the description of possible casualties,” MP Irina Yarovaya of the United Russia party told reporters on Monday.

“The Congress’ ideas look like ‘A Nightmare on Elm Street.’” she added.

The comment comes after media reported that the US Congress had directed the Pentagon and intelligence agencies to evaluate the ‘survivability’ of Russian and Chinese leaders in the event of a nuclear exchange. Experts must now evaluate whether various senior political and military leaders of each country could survive a nuclear attack and continue operating afterwards.

Although the study was ordered before US President Donald Trump took office, news about it was released after the new president announced that Washington “must greatly strengthen and expand its nuclear capability until such time as the world comes to its senses regarding nukes.”

“Instead of fighting terrorism, the US Congress is entertaining itself with hope to ‘play’ with nuclear weapons. We can witness a sick and dangerous hobby that is targeting world peace and the security of mankind as a whole,” MP Yarovaya told reporters.

In late 2016, Russian President Vladimir Putin admitted the possibility of a new arms race between Russia and the United States, blaming it on former US President George W. Bush’s withdrawal from the Anti-Ballistic Missile treaty.

The Russian leader explained that as the Bush administration withdrew from the ABMT in 2002, the treaty was terminated, and Russia responded by taking measures to ensure that the US’ antimissile shield would not be effective against Russian missiles.

Putin also said, however, that the modernization of Russia’s military was completely within the framework of international agreements, including the New START. The president added that, even if Russia is drawn into an arms race, it won’t spend more than it can afford, saying “we are fine with the situation and fulfill all our [military modernization] plans.”

FILE PHOTO: A Trident II, or D-5 missile, is launched from an Ohio-class submarine © Reuters
–
The US Congress has directed intelligence agencies and the Pentagon’s Strategic Command to evaluate the ‘survivability’ of Russian and Chinese leaders in the event of a nuclear strike on their aboveground and underground defense facilities.

The comprehensive study will be carried out by the US intelligence agencies as well as the Strategic Command, which is in charge of the American nuclear forces. They will evaluate whether the Russian and Chinese leadership could survive a nuclear attack and continue to operate in a post-strike environment, according to a little-reported section of the 2017 National Defense Authorization Act (NDAA). 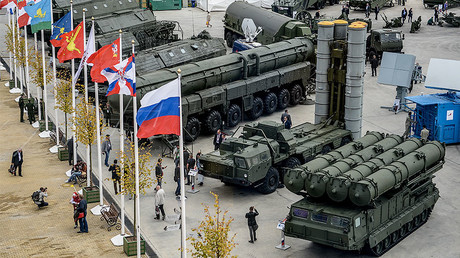 If we are in arms race, US started it by pulling out of ABM treaty – Putin

“Key officials and organizations of each respective country involved in managing and operating such facilities, programs, and activities” should also be identified, says the document, which is somewhat reminiscent of an elaborate war plan.

“Our experts are drafting an appropriate response,” Navy Captain Brook DeWalt, spokesman for the Strategic Command, said in an email to Bloomberg on Monday. While “it’s premature to pass along any details at this point, we can update you further at a later date.”

Although the study was ordered before Donald Trump took office, it appears to coincide with his statement that he would unconditionally support strengthening US strategic arsenals. In an incendiary tweet in December, Trump wrote that Washington “must greatly strengthen and expand its nuclear capability until such time as the world comes to its senses regarding nukes.”

Later in the month, Trump stunned arms control experts, reportedly telling Mika Brzezinski, co-host of MSNBC’s ‘Morning Joe’ program: “Let it be an arms race. We will outmatch them at every pass and outlast them all.”

The remarks came despite Trump’s separate statement that he would consider a rapprochement with Moscow in response for a possible new deal on nuclear arms reduction.

While seemingly opaque, Trump’s comments left many to speculate as to whom his threats of a renewed arms race were directed against. Currently, Russia is the only country that can match the US in terms of nuclear strategic capabilities in both size and quality, with Moscow’s nuclear triad believed to be enough to bring about so-called ‘mutually assured destruction.’

Congressman Mike Turner (R-Ohio) said in an email to Bloomberg that the US “must understand how China and Russia intend to fight a war and how their leadership will command and control a potential conflict. This knowledge is pivotal to our ability to deter the threat.”

The US and Russia possess roughly 90 percent of the world’s nuclear weapons, while most of them are many times more powerful than the American atomic bombs dropped on the Japanese cities of Hiroshima and Nagasaki in 1945. A single nuclear warhead, if detonated on a large city, could result in millions of fatalities, with contamination effects persisting for decades.

Last week, the Bulletin of the Atomic Scientists adjusted the famous ‘Doomsday Clock,’ which visualizes the perceived distance to a nuclear disaster. The hand was moved 30 seconds closer to midnight, and it now stands just 2.5 minutes away – a time unseen since 1953, when the US and USSR were designing and testing hydrogen bombs.

“Over the course of 2016, the global security landscape darkened as the international community failed to come effectively to grips with humanity’s most pressing existential threats, nuclear weapons and climate change,” the scientists stated.