For the first time in five years in Lugansk an Eternal Flame was lit up in memory of the fallen in the Great Patriotic War. An anti-fascist march preceded the ceremony, which was attended by the administration of Lugansk People’s Republic and 4 thousand residents of Lugansk. The fire was out for five years due to a lack of funds to pay for its maintenance. ”

70 years ago, our fathers, grandfathers, great-grandfathers won this victory, did everything so that today we would forget about Nazism. But, unfortunately, it grew and produced its seeds. It causes disgust in normal people. On the wrongly cultured soil it yields new growth” – said the head of LPR Igor Plotnitsky.

The marchers walked from the Government House to the Memorial to the Fighters of the Revolution. During the procession, the people chanted:

“Donbass will not be put on its knees!”

“Donbass – the tomb of fascism!”

After the march the Eternal Flame was solemnly lit at the Memorial to the Fighters of the Revolution. The torch with the Eternal Flame was brought from Krasnodon, the hometown of the ‘Youth Guard’ – a group of young people who fought the Nazis during the Great Patriotic War and were brutaly tortured and killed. Their story inspired many books and movies.

The flame was lit by the head of Lugansk Republic Igor Plotnitsky, who said:

“For five years Lugansk did not light the eternal flame. Unfortunately, the city did not have 120 thousand UAH to maintain it. For one person it is a big amount, but the Republic will be able to raise these funds. And I promise: the Eternal Flame in Lugansk will never go out,” – said Plotnitsky. 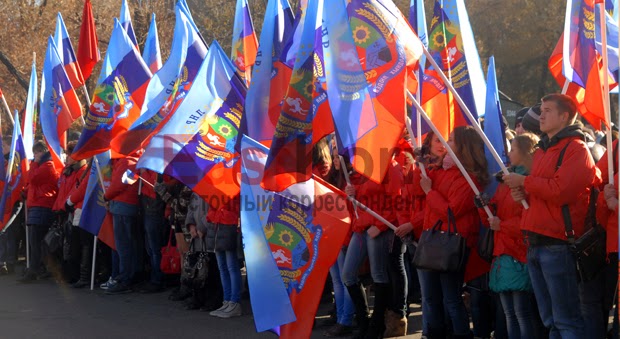 Afterwards the participants laid flowers to the Eternal Fire, and observed a minute of silence for those killed in the War and those who died during combat operations in 2014.

Previously the Eternal Flame was lit in Lugansk only on holidays. The government considered it was too costly to maintain. The daily burning of the Eternal Flame costs about 500 thousand UAH in year. The gas supply system for the flame was commissioned in 1959 and since then has not been significantly altered. In 2011, when work was carried out on the reconstruction of the memorial, city officials planned to reconstruct the system with modern energy saving technologies. But this work was never carried out.