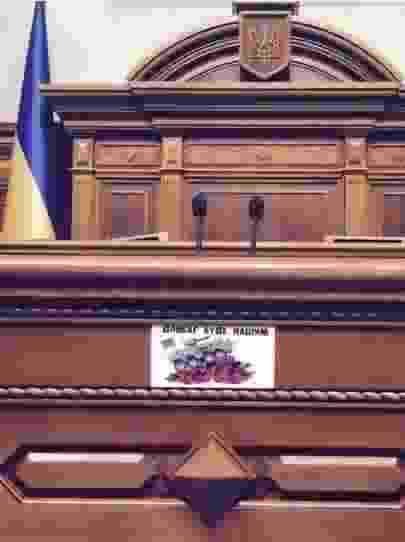 President Petro Poroshenko and his government have run out of wiggle room to deflect charges of genocide any more.

Andrey Biletsky, former “Azov” battalion commander, Ukrainian nationalist ideologist, and a favorite in Victoria Nuland’s circles ( Biletsky was made a Verkhovna Rada deputy by Arseni Yatsenyuk) made clear who those terrorists are in an interview with Foreign Policy .

“Unfortunately, among the Ukrainian people today there are a lot of ‘Russians’ (by their mentality, not their blood), ‘kikes,’ ‘Americans,’ ‘Europeans’ (of the democratic-liberal European Union), ‘Arabs,’ ‘Chinese’ and so forth, but there is not much specifically Ukrainian… It’s unclear how much time and effort will be needed to eradicate these dangerous viruses from our people.”

Biletsky, a new Senator who is being groomed for the Ukrainian presidency thinks even his American handlers are part of the virus infecting Ukraine.

His Azov battalion (with Nazi insignia)  are showing their true American and European values in Mariupol by gang raping women prisoners at prison every night, torturing, and murdering some of them. This is someone that describes Americans and democratic values as a dangerous virus that need to be eradicated making sure your US tax dollars hard at work again.

According to an article that was published in the Kharkov News by Rita Samoilov on December 25th 15-20 women prisoners at penal colony #107 are taken to the military camp every night and raped by the Azov battalion. Earlier in the year I reported the same behavior at the mines in Lower Krynka by Aydar battalion which resulted in reports of mass rape, torture, and mass graves found on the site where over 5000 Ukrainian cleansing troops and national guard were camped. Upon checking the allegations the OSCE found them to be true. Kiev responded by making Aydar the new model of policing in Ukraine.

One of the nurses at a hospital that treats the torture victims after the fact is saying that they are working to save the lives of some of the women that are dropped off with expanding construction foam stuffed inside their vaginas and anuses. Originally it was an employee of the prison that brought this to light by calling Rita Samoilov about the story.

The women are treated this way because they are considered to be terrorists in a city where not having pro- nazi contacts on your phone is enough to get you arrested. Is it as ok for Ukrainian nazis to rape women prisoners as it is fellow soldiers?

In Mariupol the Ukrainian government is directly responsible for the welfare of the women in the penal system. Could a US governor walk away from this kind of scandal unscathed? If governor Rick Perry was suspected of even knowing (Ukraine is the same size as Texas) a state crime this big might be going on broadcast news would be all over it. The investigations would be swift and he would NOT be allowed to conduct them himself.

In Odessa, a city Poroshenko described as Ukrainized after the May pogrom; Ukraine is bringing in tanks and armored personnel carriers to hunt for separatists. The cleansing crews arriving on December 30, 2014 are going through social media lists arresting people that have done nothing against Ukraine.

Lets be clear; this isn’t State sanctioned rape and torture on Kiev’s part. This is the Ukrainian government providing the rape and torture victims. The women are kept in prison, many for the charge of separatism. This is State sanctioned rape of prisoners by every country and government outside of Ukraine that is supporting Kiev that won’t step in and investigate it.

Ukraine Where Murder is the base of your financial planning

Why would people volunteer to do this? One Ukrainian volunteer that was captured twice answered this question to a large degree. They asked him why he came back? The volunteer (not a conscript) said the first time he was in Donbas he made enough money to purchase a car. He came back because he wanted to make money and buy a house.

This murder for hire mentality is prevalent inside the cleansing battalions. These battalions are committing most of the atrocities and do so with definite rewards in mind. Look at the Rada in Kiev today. The more land they clear of people, the more property they are given. To do so the people that live in those cities, towns, and homes need to go one way or the other. If you can’t scare them, kill them.

According to an article in livejournal Since June 2014 members of ATU and family members of deceased servicemen in the territorial bodies Goszemagentstva ( Dept of Land Resources) was filed 15,582 applications for land .

These represent land grants given by the Ukrainian government for how effective they have been getting rid of separatists. The cleansing battalions don’t fight in the war. They murder and rob. They torture and rape. They fill tractor trailer loads with the possessions robbed from the murdered and displaced they want to keep or sell. They like their work.

The city of Kharkov is outside of Donbass. It is and has been under Ukrainian control this whole time. Kharkov has a strong anti-maidan movement in it. In the new democratic Ukraine on November 22 Victor a VK anti-maidan group editor was arrested and taken for questioning by the SBU (Ukrainian FBI). VK (V Kontakte) is the Russian version of Facebook. The group editor is the person that publishes the posts for the group on the page.

Victor who clearly wasn’t in Donbass and not a militia member was tortured for 4 days before being dumped on the side of the road in a coma. He never regained consciousness and died on November 26th. The official cause of death on the certificate from the hospital was pneumonia. Four days earlier Victor’s family says he was healthy.

Every one of Victor’s fingers were broken and bent to the back of his hand. His finger nails were pulled out. Every rib was broken. Alexander’s skull was split. This was just questioning. He was never charged formally.

This is the same Kiev government that promised amnesty for anyone that did not participate in the war and included amnesty for people that guarded warehouses for instance according to Andrey Lysenko the speaker of the National Security and Defense Council in Kiev.

This is happening today all across Ukraine from Lviv (Galicia, western Ukraine) to the Kiev controlled areas inside the neutral area outside Donbass. The only area the official Ukrainian style of questioning isn’t happening is Donbas.

In Ukraine, news can’t be reported until it is cleared through official channels. Reporters that go against this on a good day find themselves out of work. On a bad day they are sent to the front lines in Donbass as conscripts in the army.

In an effort to shape public opinion popular news presenter Natalya Stanko stated bluntly that Kiev should bomb Donbass into oblivion because bombing them was nobler and starving people to death was to slow. Linguistically the word for “death” she chose referred to slimy undesirable creatures, not typically referenced for people.

In the video below Ukrainian senator Semen Semonchenko explains the reason why they won’t let humanitarian convoys into Donbass is that there is no humanitarian crisis there at all. According to him if the pensioners that had their payments cut off want to reinstate them all they needed to do was to go to a city in Ukrainian control like Slavyansk and apply there.

Semenchenko then stated that the humanitarian cargo they stopped was needed for a city that had a real humanitarian crisis- one in Kiev’s control since mid summer. If the people there were getting their pensions, utilities, or heat like he said Donbass pensioners could get what does this mean?

Semenchenko left out the fact that without having a living permit (Propiska) in a city, you can’t apply for anything.

All of this will seem small if Kiev is allowed to attack again. Since the peace started they kept the convoys of weapons and ammunition moving into Donbass. The probing attacks they have conducted point to a large offensive starting very soon, possibly within days.

Should American or European money be used to fund this?

The humanitarian crisis in Donbass continues to grow rapidly. Currently the only direct help coming in is from Russia. Please consider donating to humanitarian groups working directly in Donbass.

At the beginning of October, the Russian Investigative Committee announced their investigation had found over 12,000 people from East Ukraine to be victims of war crimes. The Committee filed a claim of genocide.

According to [Committee spokesman Alexander] Markin, “unidentified individuals from the ranks of the upper levels of Ukraine’s political and military leadership, the Ukrainian Armed Forces, the Ukrainian National Guard, and the Right Sector gave commands directed at the full annihilation of Russian-speaking citizens living in the territories of the Luhansk and Donetsk republics.” [i]

How many victims now?