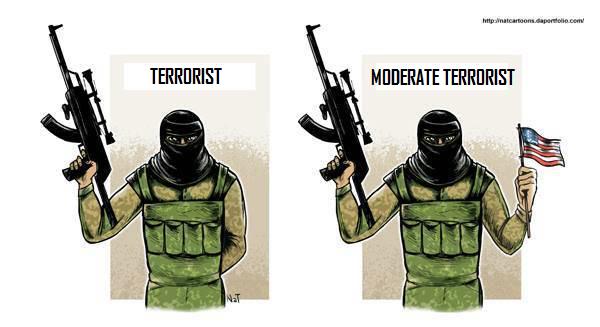 MOSCOW, October 2 — RIA Novosti. The Pentagon is looking into the issue of whether the use of military force to protect the Syrian “moderate opposition” [read: moderate terrorists – KR], if it is subjected to Russian airstrikes, but no decision on this matter has been made, reports the Associated Press, citing U.S. officials.

U.S. officials told the agency that high-ranking military leaders and Pentagon are researching the legal and foreign policy aspects of the issue [damn Russia tricked them into remembering about the law! – KR] and weigh the risks of using military force in response to the possible actions of the Russian air force on the backed by Washington Syrian opposition groups. The U.S. Secretary of Defense Ashton Carter declined to answer this question, when asked directly about it earlier this week, the agency said.

A senior official of the Russian Defense Ministry said Thursday that representatives of military departments of Russia and the United States discussed regular communication of experts to prevent conflict of interests in the Syrian airspace, the conversation had been constructive.

Earlier the President of Russia Vladimir Putin has declared that  he expects the completion of the dialogue between Russia and the U.S. to coordinate actions to combat terrorism in Syria and the establishment of a permanent mechanism for such interaction.

U.S. officials told the agency that the issue of use of military force is discussed as one of the options of how to respond to Russia’s actions in Syria. One of the officials noted that the military is assessing the possible negative consequences of such step, however, the final decision is still pending.

Earlier, the Chairman of the Committee on Armed Forces of the U.S. Senate, John McCain has expressed confidence that Russian planes yesterday bombed not the positions of the terrorist group “Islamic state” but units of the “Free Syrian army”. The agency notes that the American-trained insurgents are active in the North, while the strikes of the Russian air force are applied in the Western part of Syria.

In September, Pentagon spokesman General Lloyd Austin, at the hearings of the Senate Committee on the armed forces acknowledged that only four or five American-trained fighters are fighting against ISIS [the rest fled to ISIS – KR]

Russia has begun air strikes on ISIS positions in Syria in response to a request from President Bashar al-Assad. The US-led coalition has been [pretend] striking ISIS since September 2014 in Syria in circumvention of the UN Security Council and not coordinating their actions with Syrian authorities. [While ISIS territory only increased – KR]