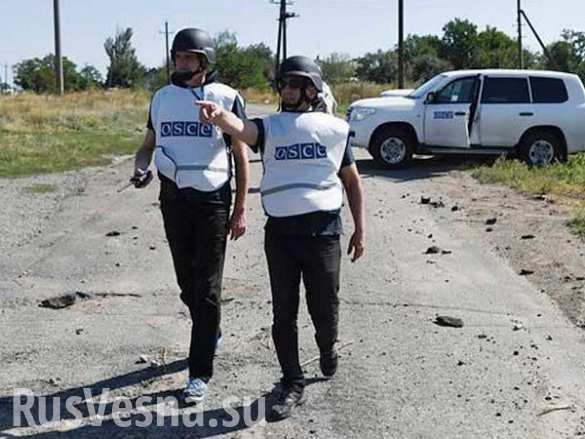 On April 28, the Special Monitoring Mission of the OSCE released a report which covered the circumstances of yesterday’s overnight shelling of the military checkpoint in Elenovka and drew conclusions as to from what direction the shelling came.
International observers reported that two craters from explosive shells were recorded at the place of the tragedy along with three damaged cars.
According to their analysis, the experts resolved that the shelling was fired from the West-Southwest (where UAF positions were located – Russian Spring), and that the guns fired were most likely 122 mm artillery.
In addition, the experts recorded traces of shell fragments on Moscow Street, three shells of which, as the analysis showed, were no less than 120 mm calibre and came from the West-Southwest direction.
A building near the shelled military checkpoint was also recored as being damaged and having holes the size of grapefruits caused by shrapnel.
International observers have summarized the details of those killed as a result of the shelling and the causes of their death. Two of the dead (one a male, the second body difficult to identify) were found in the first car burned and torn in half as a result of the shelling.

The driver of the second car died from severe head trauma.

The female passenger sitting in the back seat of the third car located 20 meters from the second was killed most likely by shrapnel.

The third car was riddled with shrapnel which, according to OSCE observers, was probably caused by one of the explosions