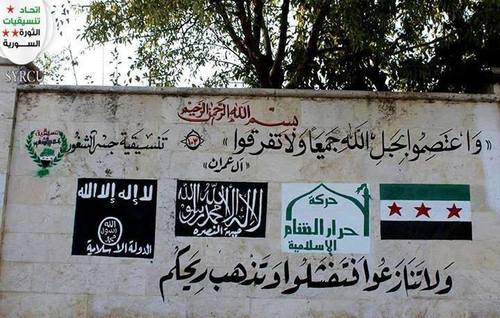 On Tuesday, 10th May 2016, the UN held a vote on the inclusion of the extremist groups Ahrar Al-Sham and Jaish al-Islam on the list of “terrorist” groups.The United States, France, UK, and Ukraine all voted against this resolution. This vote was the result of a proposal made by Russia in April, where even then the US implied that it would opt to block such a move in the future.
As was explained in this Fort Russ article, Russia finds itself caught in an Atlanticist web, where one week Group X are ‘terrorists’, and 7 days later they magically become “moderate”. The US has the ability to do this of course because of their imposing influence not only at the UN, but also in the world of Non Governmental Organisations. The Syrian Observatory for Human Rights, for example, provides Pentagon-funded agencies like Reuters with falsified information, which then travels along the NGO spider’s web, ending in such information being the top search result in Google or Yahoo. This method of information spin relies on idle minds and habitual behaviour, something that the State Department’s own Vice News feasts on (Hipsters).
Assuming that the majority of people obtain their knowledge from the US-controlled Wikipedia, it can be said that it is common knowledge that Jahbat Al-Nusra are “Al Qaeda in Syria”, and that they represent the Salafist ideology.
It can also be said that Ahrar Al-Sham, besides being Qatar’s finger in the Syrian pie, are also widely known to be loyal to the Salafist ideology:
And finally, it can also be presumed that Jaish Al-Islam are widely known to be loyal to the Salafist ideology:
So despite all 3 groups sharing the same ideology, only 1 has been placed on the UN list of terrorist organisations.
Taking into account what is known about the events on the ground in Syria, Al-Nusra have been able to capitalise on Russia’s postponement of the assault on Aleppo. In order to appease not only the Higher Negotiations Committee, but  John Kerry also, Russia moved some toys out of Syria, and seemingly thought that the US, in return, would offer to rein-in the groups they have influence over in Aleppo.
Unfortunately, Putin was left feeling disappointed at the US’ semantic games, and now looks like a villain in the eyes of Iran and the Syrian Army, who are now lacking air support when they need it the most.
Robert Fisk’s excellent article entitled “After splitting with Al-Qaeda, Al-Nusra is being presented to the West as a moderate force. It’s nothing of the sort” highlights that the West uses an non-existent group (Cameron’s 70,000 for example)  that are earmarked as ‘moderates’ who can behave as a Trojan Horse in the Levant. This role was initially played by “ISIS”, but Russia quickly removed them from the main equation, and now Al-Nusra are Obama’s go-to guys. They have inherited a magic shield that protects them from Russian KAB-500Kr and OFAB-500 bombs. Maybe soon they will give them MANPADs too – a throwback to the 80’s…
The US’ plan in Syria hinges now on Al Qaeda, who must somehow arrange themselves in Aleppo in a way where Samantha Power, US’ permanent representative at the UN, can help them to dissimulate their true objective – to create a Salafist Emirate in Syria.
On a separate note – Ukraine vetoing the resolution is a statement in itself, and really confirms that Kiev is acting as an auxiliary ammo depot for Takfiri Jihadists. US Gladio-B outposts outside Syria provide the IMF with fresh blood and Angela Merkel with more banana republics inside the now frail EU.
Russia can only counter this hybrid encircling by attacking the head of the snake – Jabhat Al-Nusra – and by offering the Syrian Army and the Iranian Al-Sabereen units the air support they need to liberate Aleppo district by district. This war still has a long way to go…
http://www.fort-russ.com/2016/05/salafist-shades-of-gray-us-uses-veto-to.html