Vladimir Degtyarenko and Denish Pushilin, the chairmen of the People’s Councils (parliaments) of the self-declared Lugansk and Donetsk People’s Republics, have appealed to Russian President Vladimir Putin, US President Donald Trump, and German Chancellor Angela Merkel to “stop Prooshenko.”
As the Lugansk Information Center reports, the DPR and LPR urge these leaders to “force Poroshenko to cease his criminal actions against the people of Donbass,” stop shelling civilians, and end the economic blockade.
“This must be done before it is too late! Before ecological and humanitarian catastrophe grips our land, stop this big mess! Stop Poroshenko! Save the people of Donbass!,” the appeal reads.
Earlier today, Donbass militiamen and Ukrainian security forces announced that the situation in Donbass has worsened. Both sides of the conflict blame each other for the increasing intensity of attacks and offensive attempts. The situation is close to a humanitarian catastrophe. The residents of Avdeevka have been left without water, light, and heat due to shelling.
On Tuesday, the Armed Forces of Ukraine twice attempted to break through the positions of the Donbass militia. As a result, the DPR’s Ministry of Defense reported, more than 25 Ukrainian soldiers were killed.
The Kremlin has stated that Moscow is concerned by Kiev’s aggressive actions in Donbass which are undermining the Minsk Agreements. Russian Presidential Press Secretary, Dmitry Peskov, stated that Russia has reliable information that the attack near Avdeevka was started by “independent Ukrainian brigades” supported by the Ukrainian armed forces.
http://www.fort-russ.com/2017/01/stop-poroshenko-donbass-parliaments.html

Ukrainian President Petro Poroshenko has cut a working visit to Germany amid the increased fighting between pro-Kiev forces and local militias in the region of Donbass in eastern Ukraine.

Heavy clashes and artillery duels in the area have been reported since January 28, inflicting casualties on the warring sides and to the infrastructure in the areas south and southeast of Donetsk, a capital of of the Donetsk People’s Republic (DPR).

A spokesman for the Ukrainian President said that the situation around the Kiev-controlled settlement of Avdeevka “an emergency situation verging on a humanitarian disaster,” ignoring that a large scale-attak on DPR forces launched by the Ukrainian Armed Forces and pro-Kiev paramilitary groups was launched from this direction.

Poroshenko’s working visit to Germany was clearly synchronized with the advance of pro-Kiev forces in Donbass. Thus, the only reason of the move was to come in focus of the mainstream media and to blame DPR forces and Russia for an alleged violation of the international agreements.

The Poroshenko regime urgently needs to attract attention of foreign players to itself and to get their assistance amid the ongoing political and economical crisis in Ukraine.

Considering that, the Kiev regime has repeatedly show that it’s ready to violate any international, humanitarian and moral norms to achieve own political goals, there are little doubts that the observed escalation was a planned act.

To donate to South Front and help it continue its work, go to the link above. 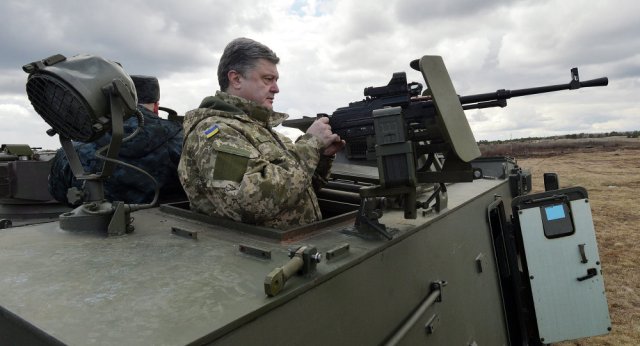 Since Fort Russ readers rather well know the situation prevailing in Donbass, I’ll take the liberty of refraining from regurgitating facts and details. Instead, I dedicate today’s commentary to two unfolding events in and around Donbass. I base my commentary on media sources, social networks in the DPR and Ukraine, and on insider information I receive from Donetsk – Dr. Eduard Popov
–
The military situation in the Donetsk People’s Republic
–
Battles have not quieted down since January 29th. The Ukrainian Armed Forces’ tactic of gradually seizing neutral territories (“creeping offensive”) appears to have highly infatuated Ukrainian officers and patriots in the rear and is now taking on a life of its own. The result has been that the Ukrainians have convinced themselves that Donbass forces are weak and therefore decided to undertake a massive offensive. This is a fatal mistake.
According to reports from sources in the DPR, the republic’s army has suffered heavy losses. Alexander Zhuchkovsky has reported dozens of killed. But the UAF and neo-Nazis’ losses are several times higher. Today, the DPR’s intelligence services intercepted and published a secret report by the ATO headquarters for President  Poroshenko. The total number of casualties among the UAF over the past two days of firefights is estimated at 78 dead and several dozen wounded. Let me draw your attention to the fact that we are talking about the bodies of Ukrainian soldiers that have been recovered and taken to the morgue in nearby and far-off cities. The number of bodies that weren’t recovered from the battlefield while under artillery fire, the number of bodies completely destroyed by the explosion of military vehicles (tanks, volley artillery, etc.), and the number of wounded still in hospitals – these figures remain unknown. The real figures of the irreversible losses of the UAF over the past two days of fighting are probably no less than 100 men.
As Zhuchkovsky and DPR fighters themselves have reported, the Ukrainians have been surprised by the stiff resistance put up by the republic’s forces. Hitherto, the DPR army had heartbreakingly refused to respond “eye for an eye” to the UAF’s provocative fire. On January 29th and 30th, however, Donbass’ artillery finally put in heart and soul and laid down a “whirlwind of fire” (Zhuchkovsky’s expression) on Ukrainian positions.
The general result: although the situation in the combat zone is complex and fraught with escalation and large losses, overall it is going well for the Donbass republics.
Thus, political conflict in Ukraine moves to the fore.
–
Poroshenko’s gamble
–
As Ukraine’s military adventure fails, Poroshenko is starting to playing a diplomatic gamble. Poroshenko’s efforts on January 31st fit into this formula. First, he urgently interrupted his visit to Germany and meeting with Chancellor Angela Merkel. Then he called to convene the Tripartite Commission (the “Normandy Four” minus Russia). The Ukrainian foreign ministry today issued a statement which routinely accused Russia of escalating the conflict in Donbass. Without a doubt, soon will follow a Ukrainian appeal to the UN and other international organizations.
But I’m not going to talk about the stupidity of such speculations. Even Ukrainian officers admit that the offensive was undertaken by the Ukrainian side. Russia does not benefit (especially not now) from an escalation of the situation in Donbass. The only beneficiary is the ruling Ukrainian regime.
According to his press service’s official statement, Poroshenko was forced to urgently return to Ukraine to address the “humanitarian situation” in Avdeevka which, let us note, occurred as a result of none other than the Ukrainian army’s adventurous actions on Poroshenko’s orders.
The situation in Avdeevka and the massive losses that the Ukrainian army is incurring nevertheless give the Ukrainian president an occasion to play the role of the victim and cry to the world (the West) to punish the offender (Russia). If the UAF had not met such tough resistance on its attack and if the offensive had gone deep into the republics of Donbass, then Poroshenko would simply conjure another formula justifying Ukraine and blaming Russia. To be more precise, such a formula has long since been hatched and is waiting its turn.
The main actor for whom this whole bloody spectacle is being played is US President Donald Trump. We’ve already repeatedly written for Fort Russ on how Poroshenko is attempting to provoke a war in Donbass in order to prevent normal dialogue between the US and Russia. Allow us to recall the content of one of our articles, in which my sources in the DPR’s military circles forewarned that they expect a massive UAF offensive just before or immediately after Trump’s inauguration.
Poroshenko’s regime is practically at a stalemate on both the international and domestic political fronts. Before the new team of American diplomats appointed by Trump starts working and Trump’s new European policy principles swing into action, Poroshenko will try to win over the American president. His method? By literally producing the fait accompli of “pro-American” Ukraine (in reality, pro-liberal and “pro-democratic”) needing support in Donbass. The Americans call this trick “wag the dog.”
Donald Trump has barely had time to settle into the office of US President, yet his name has already started to bear fruit in Donbass. I believe that the consequences of this factor will be devastating – if not for Ukraine, then for the ruling Poroshenko regime.
http://www.fort-russ.com/2017/01/the-trump-effect-in-donbass-poroshenko.html
Follow Free Ukraine Now on WordPress.com