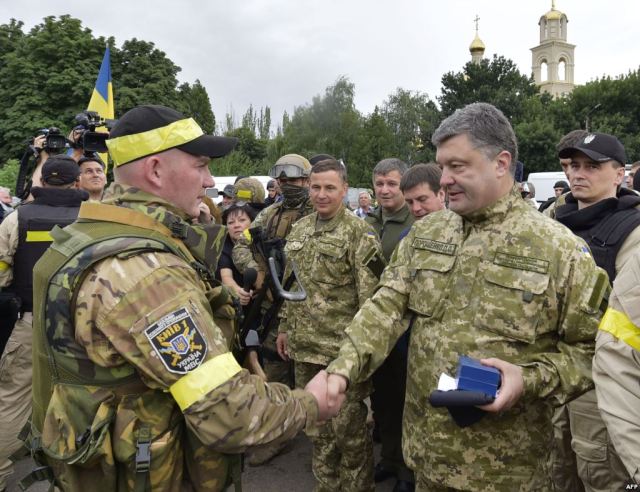 Ukrainian soldiers have received awards for their shelling of the Elenovka checkpoint, as a result of which peaceful civilians were killed. This was stated by the representative of the Ministry of Defense of the DPR, Eduard Basurin. Basurin reported:
“On April 29th, the Chief of the General Staff of the UAF, General Muzhenko, arrived at the residential area of Volnovakha. He was transported by an armored AT-105 Saxon car. It should be noted that Muzhenko’s visit was associated with preparations for intensified military operations for the coming days. In addition, in order to maintain the morale of commanders forced to perform criminal orders, Muzhenko awarded the most distinguished soldiers of the 14 brigade for shelling peaceful civilians at Elenovka.
In addition, the US Ambassador to Ukraine, Geoffrey Pyatt has been in Mariupol since April 28th, where he has held meetings with the local administration and the commanders of nationalist groupings. In tandem with Pyatt’s visit, Ukrainian security forces evacuated children from a number of a residential areas, which, as we have stated earlier, is connected with the preparation of terror attacks and UAF shelling. The US Ambassador plans to visit Odessa, where he will meet with the leadership of security structures and the sponsors of nationalist units participating in the “Kulikovo Field Operation” planned by the Ukrainian leadership to last from April 30th to May 3rd.”
http://www.fort-russ.com/2016/05/basurin-uaf-soldiers-awarded-for.html
Follow Free Ukraine Now on WordPress.com