The president of Ukraine Petro Poroshenko has today, April 30, officially announced the completion of the so-called antiterrorist operation in the Donbass. At the same time, the president proclaimed the beginning of the operation of the united forces (OOS).

“Today, on April 30, 2018, a large-scale anti-terrorist operation in the territory of Donetsk and Lugansk regions ends. We are now starting a military operation under the leadership of the Ukrainian Armed Forces to ensure the protection of territorial integrity, ” Petro Poroshenko said.

The Ukrainian president also said that “a military operation to protect territorial integrity will be completed only when the last piece of Ukrainian land, including the Crimea, is liberated.”

Today, America’s long awaited lethal weapons have been confirmed to be delivered to Ukraine.

“The enemy will be irreversibly subdued” – Basurin

The Ukrainian Armed Forces are preparing a ‘blitzkrieg’ to seize the territories of the Donbass between March and June – as announced today by the operational command of DPR, Eduard Basurin, referring to intelligence data.
“The plan provides for military units with the support of artillery to overcome the security zone and break through the first defensive line within DPR and LPR, to take control of advantageous positions.” – he noted.
Kiev will inflict the main damage to the north and south of Donetsk.
“Strikes will be coordinated in the direction of Verkhnetortsekoye, Ilovaysk and towards Maximov, Starobeshevo, Ilovaysk. They will try to overcome the line of combat and break through the first defensive position. Then, having increased their power with the introduction of reserves, they will attempt to cut into Donetsk divisions, to encircle and seize Donetsk.” – said Basurin.
The ultimate goal is to reach Novoazovsk and seize the coast of the Azov Sea.

The invasion of the LPR is planned from the direction of Lutugino. According to Basurin, the data from aerial reconnaissance, equipment at the front line, as well as the active replenishment of fuel and ammunition supplies also testifies to Kiev’s plans.
“I note that the blitzkrieg will not bring the expected result to the Ukrainian side, and in case of armed aggression against the People’s Republics, the enemy will be irreversibly subdued.” – Busurin summed it up.

Fighting occurred between regular units of the Ukrainian Armed Forces yesterday in Avdeyevka, in the Donetsk oblast. This was reported by the Donetsk People’s Republic (DNR) Ministry of Defense Corps, Deputy Commander Edward Basurin.

“We have documented evidence of an exacerbation of confrontation not only between the regular army and the Ukrainian Volunteer Battalions, but also skirmishes between units of the UAF,” explained Basurin.

The Deputy Commander said this before reports that the 93rd mechanized brigade of the UAF required the rogue volunteer battalion ‘OUN’ (Organization of Ukrainian Nationalists) to leave their positions near Peski.

“And today, April 11, in Avdeyevka there has been fighting between regular units,” said Basurin. 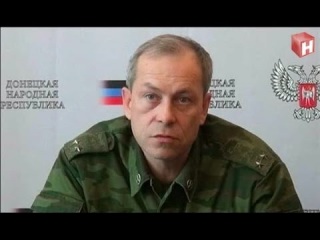 “Please note that these facts of Ukrainian units firing at each other, are presented to the Ukrainian authorities as a violation of the ceasefire by the DNR militia, as regularly reported in the OSCE and Ukraine controlled media,” – said the representative of the military department DNR .

Recall that on April 1st, the DNR Defense Ministry reported that the Ukrainian battalion “Donbass” opened fire on positions of the “Right Sector.” According to representatives of the militia units who do not want to obey the command of the UAF, “We reserve the right not to respect the ceasefire.”

The leadership of the armed forces of Ukraine had decided, at the end of the day, to take the Volunteer Battalion ‘OUN’ from the line of contact (ceasefire line) in Peski.

“By staying on the front line, the Volunteer Battalion of the OUN, which is not officially part of the armed forces, did not allow Ukraine to fully implement the Minsk agreement”- said in a statement posted on the UAF website.

The ceasefire officially came into effect in Donbass on February 14, 2015 at 01:00 in Donetsk. The DNR has repeatedly stated that compliance with the truce depends entirely on the Ukrainian side.

The President of Ukraine Petro Poroshenko introduced a bill to the Verkhovna Rada to enlarge the maximum size of the national forces.

The draft was registered on Monday and the corresponding document was published on the website of the Ukrainian Parliament.

According to the draft, the Ukrainian military should not employ more than 250 thousand people, including 204 thousand soldiers. However, it was noted that during an emergency the military may be strengthened with conscription.

“The size of the Ukrainian Armed Forces in emergencies shall grow by the number of servicemen recruited for military service consistent with the mobilization decrees of the Ukrainian president,” it said.

The funds for an increase in the Ukrainian Armed Forces are provided for by the budget of 2015.

This comes a week after President Petro Poroshenko said that the new Minsk agreements on regulating the crisis in eastern Ukraine give hope, but he is unsure whether they will be fully implemented.

US Plans to Send 300 Military Personnel to Train Ukrainian Soldiers

“We managed to reach agreements that give hope that the events in Donbas will transition from the hot stage to a state of political regulation. I don’t want anybody to have illusions and I don’t want to seem naive – we are still far from peace…and nobody has a firm belief that the Minsk peace agreements will be strictly implemented,” Poroshenko said last week.

The Ukrainian leader expressed hope that the situation will de-escalate, and peace will be achieved through ceasefire and withdrawal of artillery.

In early January, the Minister of Defense of Ukraine Stepan Poltorak said that the state budget for 2015 will provide military funding at the amount of 44.6 billion UAH ($1.6 billion USD).

“It is almost 3.6 times more than the last year,” Poltorak said.

A similar bill was introduced the Prime Minister of Ukraine Arseniy Yatsenyuk on behalf of the government in January. According to him, the total financing for national security and defense in 2015 will total 90 billion UAH ($3.2 billion USD).