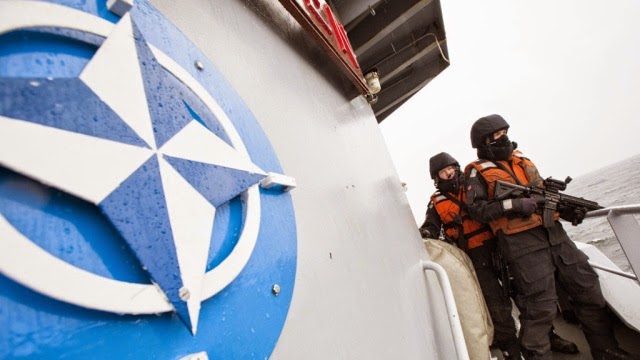 Officer of the Black Sea Navy: NATO Exercises in the Black sea – is study of Crimea’s defenses

“The Black Sea navy staff is closely monitoring all the activities of the North Atlantic Alliance in the region,” – said the officer of the Russian Black Sea fleet in Sevastopol.

All six ships – the American missile cruiser “Vicksburg” the type of “Ticonderog”, canadian frigate “Fredericton”, the Turkish frigate “Turgutreis, an Italian frigate “Alesia”, the Romanian frigate “Regina Maria” and the German supply ship  “Spessart” – are part of “the second marine group of NATO”.

According to the source, the exercises involve practicing protection against air attacks and torpedo attacks from submarines. The commander of the group, Admiral Williamson, has already stated that the exercises in the Black sea are conducted “at the invitation of Turkish, Bulgarian and Romanian governments” and support “preparedness for any NATO mission, which may be needed to perform its obligations under the collective defense”. At the same time, NATO planned exercises “according to the scenario of the crisis between the two non-Alliance countries.”

“We closely monitor the movements and actions of NATO ships, because regardless of the legend about the exercises, the activities of the ships of the Alliance are aimed at studying the defenses of Crimea“, – said the officer.

According to the source, the recently relocated to Crimea, latest Su-30 and front-line bombers Su-24, which are in constant contact with the ships of the Black Sea Fleet, in particular with 519-m separate division reconnaissance ships, are involved in monitoring the NATO group.

Earlier, an official spokesman of the Russian Foreign Ministry, Alexander Lukashevich called the entrance of NATO ships into the Black sea “a provocative idea, which will not contribute to the settlement of the conflict in Eastern of Ukraine.”