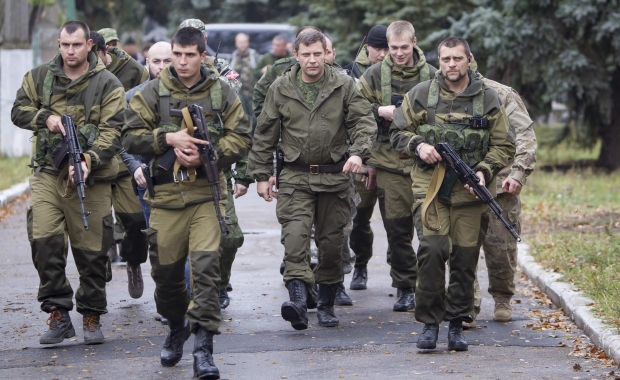 Special forces of the Donetsk People’s Republic have successfully liquidated the perpetrators of the Elenovka checkpoint shelling from April 2016, when Ukrainian nighttime shelling killed several people waiting in their cars at the checkpoint to cross the border. This was announced by the head of the DPR, Alexander Zakharchenko, in an interview for Tsargrad TV.
“You need to make the enemy understand that it won’t do these things with impunity. When the pregnant woman in Elenovka was killed, I swore to myself that I will find and eliminate those who participated in this attack. Let the Ukrainian military see now who has been killed over the last four months in all sorts of unknown cases. We found them and destroyed them,” Zakharchenko stated.
The DPR head also promised that the same fate awaits the organizers and perpetrators of the assassination of Sparta commander Arsen Pavlov, a.k.a. “Motorola”.
“We will do exactly what they did,” Zakharchenko warned.
http://www.fort-russ.com/2016/12/we-found-them-and-destroyed-them-dpr.html

Ministry of Information for DNR – Translated by Inessa Sinchougova
…Givi and Motorola have become figureheads of the conflict in the Donbass. While Western mainstream media paints a picture of “Russian Aggression” in the Ukraine, it is the Kiev US-funded Junta that is attacking the Donbass. These men have been defending their land since the start of the conflict. Poroshenko will not hold a referendum in this area because he is fully aware he will lose Novorossia (Donbass), as he did the Crimea.
On 16 October 2016, Motorola was cowardly killed with a remotely-controlled explosive device, placed in the elevator of his own home. The message delivered by the leader of the self-named Donetsk Republic is awfully chilling. It is official that the Minsk Agreement is dead. For those not in the know – the Minsk agreement provided a set of instructions, basically a ceasefire, for both sides…
http://www.fort-russ.com/2016/10/assassination-of-motorola-last-straw.html

The commander of the Sparta battalion of the Donetsk People’s Republic and famous defender of Donbass known by his callsign “Motorola,” Arsen Pavlov, was killed today, October 16th, by a bomb in his apartment building’s elevator. The incident has been officially confirmed as an assassination carried out by Ukrainian special forces.
Over the course of the war in Donbass, Ukrainian media claimed dozens of times that Motorola had been killed. This time, however, reliable sources have confirmed the news.
The Ministry of Defense of the DPR has officially stated that “According to preliminary information, Motorola was killed as a result of a terrorist operation of a Ukrainian sabotage and reconnaissance group. Upon returning home, a remote-detonated explosive device was set off in the elevator.”
Interfax was similarly told by an “informed source” that “According to preliminary information, in the elevator of the house in which Arsen Pavlov lived, an improvised explosive device was detonated. The militiaman, as planned, was in the epicenter of the explosion at the moment and was fatally traumatized.”
According to numerous news sources in Russia and Donbass, a state of emergency has been announced in Donetsk and an investigation has been launched. The DPR’s defense ministry has since announced that a tightened “anti-terrorist regime” is in effect.

Motorola, who became an internationally recognized icon of the Donbass people’s defense forces, is famous for having participated in the most intense battles of the war since the beginning of the conflict.
Having been subjected to numerous assassination attempts over the past two years, the last one was on August 25th, but failed.
Motorola’s last known assignment was being sent to the Lugansk People’s Republic to provide security during the suppression of an alleged coup attempt.