On Sunday, April 29th, disturbing news came from the frontline in Donbass. The official spokesman of the People’s Militia of the Lugansk People’s Republic, Major Andrey Marochko, cited intelligence data from Ukraine’s forward positions that the Ukrainian Armed Forces are moving heavy arms and troops up to the frontline.

According to Marochko, a train convoy of four wagons loaded with military vehicles and UAF soldiers arrived at the Kiev-controlled town of Rubezhnoe. Nine infantry fighting vehicles, two Grad multiple rocket launcher systems, and 200 UAF troops were “delivered.” Meanwhile, Marochko also reported, another company of troops from the Ukrainian National Guard’s Poltava battalion has been deployed to the town of Belovodsk.

At the same time, Ukrainian troops have continued to violate the ceasefire in Donbass. On April 26th, the UAF shelled the city of Dokuchaevsk in the Donetsk People’s Republic, killing two civilians and one DPR soldier.

According to my sources on the LPR frontline, UAF logistics infrastructure has been expanded throughout the Ukrainian-controlled Lugansk territories. In particular, military hospitals have been set up, and my sources say that preparatory work on organizing civilian hospitals for receiving wounded has also been noted.

There are no signs of inevitability that full-scale war will break out in Donbass in the coming days, but it cannot be ruled out. By pulling up troops to the frontline and preparing its logistical infrastructure, Ukraine is obviously preparing the preconditions for such.

My opinion remains that Kiev will attack not when it decides that the time is ripe for an offensive, but when the West gives the command. These days, it is becoming increasingly widespread to claim that the Ukrainians might go on the offensive ahead of the World Cup, the inauguration of President Putin, or Victory Day. Indeed, these are suitable political timings, but so were the Russian presidential elections on March 17th, yet there was no attack.

My sources in the military circles of the Lugansk People’s Republic told me in early March that they did not expect a Ukrainian attack ahead of the Russian presidential elections simply because of weather conditions preventing tank movements – whether heavy snow or the water runoffs from melting snow. In their opinion, a Ukrainian offensive would be possible no earlier than late April or May, i.e. now.

Now, as we can see, all the preconditions for a Ukrainian blitzkrieg are ripe or being prepared. Only one conditions, perhaps the most important factor, remains: geopolitics. A UAF offensive on Donbass would inevitably lead to a conflict between Russia and the West. This would be an extremely costly development. Hence why I would refrain from volunteering any unequivocal answer as to whether or not war is around the corner. Rather, we should continue to closely monitor both specific local developments and the larger geopolitical picture.

Eduard Popov is a Rostov State University graduate with a PhD in history and philosophy. In 2008, he founded the Center for Ukrainian Studies of the Southern Federal University of Russia, and from 2009-2013, he was the founding head of the Black Sea-Caspian Center of the Russian Institute for Strategic Studies, an analytical institute of the Presidential Administration of Russia. In June 2014, Popov headed the establishment of the Representative Office of the Donetsk People’s Republic in Rostov-on-Don and actively participated in humanitarian aid efforts in Donbass. In addition to being Fort Russ’ guest analyst since June, 2016, Popov is currently the leading research fellow of the Institute of the Russian Abroad and the founding director of the Europe Center for Public and Information Cooperation.

Alexey Degtyarev is the editor in chief ofCossack Media Group‘s Cossack Radio based out of the town of Stakhanov in the Lugansk People’s Republic. In this exclusive piece for Fort Russ, Degtyarev introduces the origins, mission, and operations of Cossack Media Group, and summarizes the situation on the frontline in Donbass over the past week. – J. Arnoldski
***
The History, Founding, and Activity of Cossack Media Group
Cossack Media Group began to form back in 2014, the year that the war began, when events in Donbass began to take a cardinal change and the residents of Lugansk and Donetsk started to fight back against the Ukrainian army. Whereas they lacked a sufficient number of small arms and possessed no heavy military equipment at all, the Ukrainian military had a sufficient number of both. However, the militia forces, which have now evolved into the DPR and LPR Army, were able to repel the superior enemy.

The idea of creating Cossack Media Group appeared quite simply. It was based on the realization that we, the republics of Donbass, were winning in combat but at the same time we were suffering defeat in the information war. In August 2014, it was decided to start Cossack Radio to broadcast and communicate to people the truth of the situation on the front – truth that is distorted by the Ukrainian media. In 2014, a particularly acute shortage of truthful information spread among people in Donbass. We tried to correct this deficiency. Thus, after the start of the broadcast of Cossack Radio, soldiers started bringing video materials to the studio which confirmed the shelling of residential areas in the Lugansk region (for the Ukrainians themselves, “their homeland”) by UAF forces. More and more video material appeared, so we decided to create a channel on Youtube, New Channel of Novorossiya, and start broadcasting it in the city of Stakhanov and nearby towns.

The Youtube channel, in addition to information problems stemming from the situation facing cable and landline TV, was designed for security purposes in order to inform the local population about the shelling by the Ukrainian army. The Youtube channel reported the true situation in the cities, towns and villages of Donbass to the international community. At the beginning, there were also objective reasons that led to the creation of a Youtube channel such as the lack of technical equipment and specialists, etc needed for a real TV channel. The correspondent network of our television was just beginning to unfold. This is an expensive task, so things are going slower than we would like.
END_OF_DOCUMENT_TOKEN_TO_BE_REPLACED

A video showing Kiev’s troops and tanks in the eastern Ukrainian town of Avdeevka emerged online, posted by a BBC correspondent working in the area. Earlier, the OSCE warned tanks were headed there, slamming the move as a violation of withdrawal lines.

“We met Ukrainian troops and tanks in Avdiivka [sic] who seemed ready for action – and we could hear that there is no ceasefire here,” BBC correspondent Tom Burridge‏ tweeted along with the video.

The video shows soldiers in Ukrainian military uniforms crowding around at least two tanks among high-rise apartment buildings in what appears to be a residential district. The 13-second-video also shows an OSCE car nearby.

A picture posted on Twitter by a Komsomolskaya Pravda correspondent Aleksandr Kots a little earlier appears to show the tanks in the same Avdeevka neighborhood on Wednesday, February 1.

Official representative of the press center for the Ukrainian military in Donbass, Leonid Matyuhin, denied any Ukrainian tanks were in Avdeevka.

“I’ve been in Avdeevka the whole day today. I have not seen a single tank, I saw one police CRV [combat reconnaissance vehicle] with large letters on it saying ‘Police’,” Matyuhin told RIA Novosti. 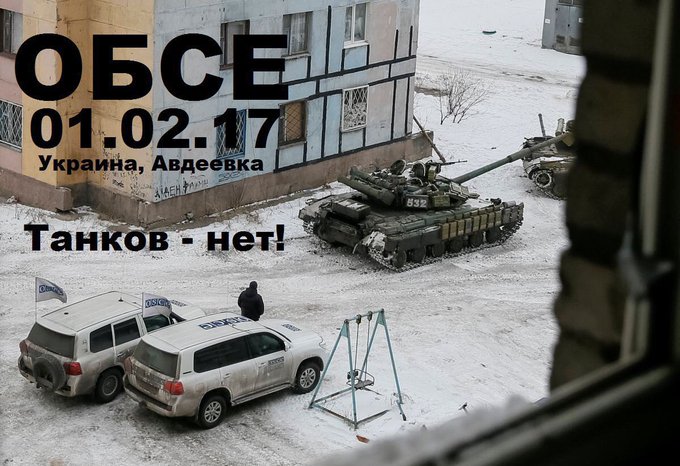 “In violation of withdrawal lines, the SMM observed … two tanks (T-64) between government-controlled Orlivka (22km northwest of Donetsk) and Avdiivka (17km north of Donetsk),” the report says, stating also that Kiev’s military equipment, from howitzers to Grad rocket launcher systems, has been spotted in Kiev-controlled Talakovka, Ivanovka and Aslanovo, along with troops and “stacks of what appeared to be ammunition boxes.”

In another report, published on Wednesday, the mission claims it noted a significant increase in ceasefire violations recorded in both Donetsk and Lugansk regions and recorded the widespread use of multiple-launch-rocket systems in Avdeevka, Yasynuvata and Horlivka, with over 10,330 explosions recorded within the past three days alone.

Avdeevka has been suffering intense hostilities for days, with the spike of violence being the largest in months. Earlier this week, Ukraine officially acknowledged that its troops began a slow advance on rebel positions in eastern Ukraine. Igor Pavlovsky, Ukraine’s deputy defense minister, however told the Ukrainian media that the step was provoked by actions from anti-Kiev forces.

“As of today, despite everything, meter by meter, step by step, whenever possible our boys have been advancing,” Pavlovsky said on Wednesday. He justified the advancement, saying that the “entire Donbass is Ukrainian territory.”

The conflict in eastern Ukraine began back in 2014, when the people in Donetsk and Lugansk regions rejected the armed coup in Kiev, which saw the then-President Viktor Yanukovich ousted and what later became President Petro Poroshenko’s government installed. The new authorities launched a military crackdown, which led to a bloody conflict that has claimed over 10,000 lives to date.

A ceasefire and roadmap for reconciliation were negotiated in 2015 with the help of Russia, France and Germany, dubbed the so-called Minsk Accords. It imposed an OSCE-monitored withdrawal of heavy weapons, which was supposed to be followed by other measures, including greater autonomy for the regions.

The deal, however, stalled at the withdrawal of heavy weapons, with violence still breaking out. OSCE monitors regularly report violations of the truce by both sides of the conflict.