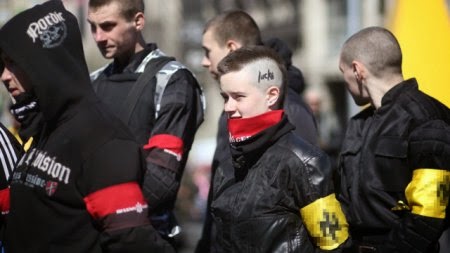 It is natural when people move to a foreign country to form ethnically-based groups where they can share common traditions, foods, heritage, history, and teach their children about their heritage.

However, when the “heritage” involves Stepan Bandera and other Nazi collaborators, racists, and ultra-nationalists, when their version of history writes out, re-writes, or even glorifies genocidal activities, and when the group begins funding and promoting activities as well as a political agenda in their new country as well as in their original country, that is very dangerous and cannot be ignored.

This article describes the activities of OUNb-UCCA affiliated groups in America aimed at young people.

This article does not include the influence of Nazi officials and scientists brought to America under Operation Paperclip, and the alliances and mentoring they provided (with the blessing of the United States government) within many branches of government and industry as well as in the American neighborhoods where they lived. It does not include the homegrown Nazi and neo-Nazi individuals and groups in this country, or the industrialists who support Nazism and fascism.  Those numbers dramatically increase the phenomenal level of influence and political pressure and power.

This is in addition to historic racism in America, which provides another layer of support.

Are Ukrainian-American children brought up to be Bandera followers? If the children of all the Eastern European and Baltic emigre populations bring their children up in American this way, will it have an effect on non-emigre children in the US? With a combined population of 20 million career age emigre ultra nationalists according to their own estimates in the United States alone, you had better find out.

Was the Euromaidan which was funded heavily by the combined emigre populations about democracy? Answering this in a surprise statement at a cabinet meeting on February 10th 2015, Ukrainian President Petro Poroshenko opened up about the basis of the post-coup Ukrainian state and the ideology it is built on.

“I think to the contrary that the Galicians are the foundation of the Ukrainian state,”

This definitely throws a damper on anyone in the EU or USA calling the Euro-maidan a pro-democratic protest or revolution. The Galicians that Poroshenko is referring to formulated the ideology of Stepan Bandera that is now the foundation of post Maidan Ukraine.

According to Ukrainian-American George Masni, a former UCCA Arizona state president “The “simple nationalism” Poroshenko is talking about is love of ones nation that drives to defend it from invaders. This type of nationalism is better known as patriotism.”

If ultra-nationalist ideology wasn’t part of the Ukrainian political landscape pre-Maidan, where did it come from? Before 1991 this ideology was foreign in Ukraine except for a tiny minority in the Lviv region.

The Nazi/ nationalist ideology of Stepan Bandera made its home in the hearts of Eastern European emigres worldwide, particularly in the United States and Canada. Each succeeding generation has been taught to be more dedicated to it than their parents were. END_OF_DOCUMENT_TOKEN_TO_BE_REPLACED