Washington and NATO control the narrative. Here, Lt. Gen. Hodges meets with “defense writers”, and tells them the spin.

Was he able to talk about diplomacy with a straight face? 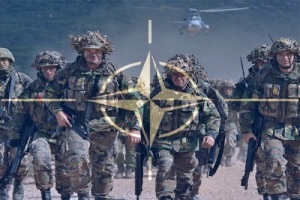 WASHINGTON: Thirteen months after Russia began its occupation of Crimea, the United States and its European allies must remain steadfast against the threat such actions pose, the commander of U.S. Army Europe said here this week.

Lt. Gen. Ben Hodges told the Defense Writers Group at a March 17 breakfast that the Russian action of illegally annexing Crimea from Ukraine and its continuing threat to the eastern part of Ukraine is a game-changer on the continent.

…Hodges told reporters to think of Atlantic Resolve as a continuous series of exercises, with American troops operating with troops in Estonia, Latvia, Lithuania and Poland, demonstrating America’s commitment to the defense of these NATO allies. Later this month, Atlantic Resolve exercises will expand to include Bulgaria and, later in the year, Romania, he said.

An airborne battalion from Vicenza, Italy, will jump into Romania and link up with a Stryker squadron coming by rail from Vilseck, Germany, Hodges said. “That will begin the introduction of [Operation Atlantic Resolve] into the south,” he added.

U.S. Army Europe also is working with countries in NATO’s Partnership for Peace program, including Georgia and Ukraine. Beginning next month, troopers from the 173rd Airborne Brigade will train Ukrainian Interior Ministry troops, and in May, U.S. paratroopers and tankers will exercise in Georgia, Hodges said.

Reporters pressed Hodges on whether the United States should provide weapons to Ukraine. He said he can see both sides of the argument, but that the focus should not be on the weapons decision. “The focus should be on what is the desired end state, and can we get there using diplomatic and economic pressures and support,” he said.

This is a very foolhardy “show”. Notice that this will also involve “air support”. The noise should be considerable. The presence of armor and troops on European roads will not just be inconvenient. It will increase tensions and fears — its goal. The U.S. wants Europeans to be afraid; it increases support for more and more NATO missions, soldiers, and weapons.

The U.S. puts all of Europe in very real danger, not Russia.

Stars and Stripes
March 12, 2015
Dragoon Ride will send US troops through eastern Europe in show of support
By John Vandiver

STUTTGART, Germany: U.S. Army soldiers with the 2nd Cavalry Regiment will soon begin a 1,100-mile convoy through six countries en route to their home station in Vilseck, Germany as they wrap up months of training with allies in Poland and the Baltics, Army officials said.

Troops will be taking their Strikers on a “road march,” dubbed Dragoon Ride. They will be accompanied by aerial reconnaissance support provided by the Army’s 12th Combat Aviation Brigade, U.S. Army Europe said.

Normally, military vehicles would be shipped back to their home base by rail after such a training mission, not by road in a high profile convoy.

To reassure countries on Russia’s western periphery, the U.S. and other NATO allies have been training continuously in the Baltics and Poland since Moscow annexed Crimea from Ukraine last year

“This is a complex mission involving a significant amount of international diplomatic and military cooperation,” Lt. Col. Craig Childs, a USAREUR spokesman, said in a statement. “It will allow all units involved an opportunity to test their unit maintenance and leadership capabilities while simultaneously providing a highly visible demonstration of U.S, commitment to its NATO allies and demonstrating NATO’s ability to move military forces freely across allied borders in close cooperation.”

The journey will take soldiers with the 3rd Squadron, 2nd Cavalry Regiment, from separate training locations in Estonia, Lithuania and Poland and convoy them through Latvia, the Czech Republic and finally to their home base at Rose Barracks in Vilseck, Germany, according to USARUER.

The 4th Infantry Division deployed a headquarters element to Europe in February to command and control U.S. land forces supporting Operation Atlantic Resolve, the military’s effort to train and reassure allies while sending a message of deterrence to Russia. The 4th Infantry Division will be responsible for overseeing the road march from the Joint Multinational Training Command at Grafenwöhr, Germany, and from mobile command group locations forward in operational area, USAREUR said.

Before Dragoon Ride begins, troops will hand over responsibility for USAREUR’s land force training mission in the Baltics and Poland to soldiers with the 1st Brigade, 3rd Infantry Division, from Ft. Stewart, Georgia, USAREUR said.

On Monday, hundreds of tanks and other military vehicles arrived in Latvia. They will be followed by 3,000 troops from the Georgia-based unit. Their rotation is expected to last until June. 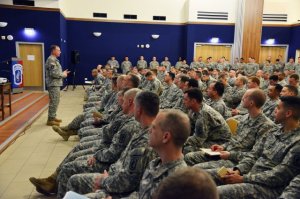 VICENZA, Italy: “I want to talk you today about Strong Europe,” said Lt. Gen. Ben Hodges, commander of U.S. Army Europe, speaking to paratroopers assigned to the 173rd Airborne Brigade here on Feb. 24, 2015, about their role in Europe and what they represent.

“Think of it in terms of people, places and things,” said Hodges. “The people, that’s all of you paratroopers. You all play a vital role and we want to continue that.”

During his visit, Hodges observed the brigade’s preparation for its scheduled training mission in western Ukraine, providing feedback for paratroopers who will train the newly-formed Ukrainian National Guard.

“When you train in all these exercises with your allies, you build relationships,” he said, referring to the brigade’s participation in exercises such as Operation Atlantic Resolve and the upcoming Swift Response and Saber Junction. “It is U.S. Army Europe’s contribution to Europe on behalf of the Army, NATO and all the components that we support.”

Training allows paratroopers from the 173rd to exercise their own quick-response procedures. As the Army’s Contingency Response Force in Europe, the brigade maintains the ability to deploy on short notice to conduct the full spectrum of operations across the U.S. European, Africa and Central Command areas of responsibility.

WIESBADEN, Germany: The commanding general of U.S. Army Europe, Lt. Gen. Ben Hodges, is in Ukraine today as part of a trip to meet with Ukraine defense officials and U.S. embassy personnel there ahead of a robust schedule of bilateral and multilateral military partnership exercises and training missions planned for 2015.

The Army Europe commander’s trip will include visits with the Ukrainian Minister of Defense and chief of Defense as well as the U.S. Ambassador to Ukraine, Geoffrey Pyatt, to gain a better understanding of the security situation in Ukraine. Ukraine has been a military partner of the U.S. dating back to the mid 1990s.

At an Army leadership forum conducted in Wiesbaden, Jan. 13-14, Hodges commented on the strategic importance of U.S. forces forward-stationed in Europe.

“Everything that happens in this part of the world the U.S. Army in Europe is part of that,” said Hodges, addressing U.S. Army leaders gathered for the event. “It’s exercises, it’s relationships, it’s capabilities, networks and allies and it is what enables our president to assure allies and deter potential threats.”

The general’s visit will also include a press engagement at the Ukrainian Crisis Media Center in Kiev, scheduled for 4:30-5:30 p.m. local.

About us: U.S. Army Europe is uniquely positioned in its 51 country area of responsibility to advance American strategic interests in Europe and Eurasia. The relationships we build during more than 1,000 theater security cooperation events in more than 40 countries each year lead directly to support for multinational contingency operations around the world, strengthen regional partnerships and enhance global security.