Ukraine has resumed water supplies to the Lugansk People’s Republic (LPR) from the Western water treatment plant located in the Kiev-controlled territory, reported a spokesman of the Luganskvoda company on Sunday.

“Ukraine resumed water supplies to the republic from the Western water treatment plant in the evening on March 11,” he said, reports TASS.

Water supplies to the LPR from the Western water treatment plant were stopped overnight to March 11 without any notification. Ukraine said water supplies had been stopped due to an accident at the water mains but did not provide any documents proving that.

On March 11 two Ukrainian fighting ships entered the territorial waters of the Republic of Donetsk, in flagrant violation of the Minsk accords and in the media silence that we have gotten used to.

The deputy commander of the Armed Forces of Donetsk, E. Bassurin, said that on Saturday, by order of the commander of the 73rd Maritime Special Operations Center, 1st captain E. Shevchenko, two warships were sent to the territorial waters of the Republic of Donetsk in the Sea of Azov, for reconnaissance and organizing provocations against the positions of the combatants.

One can wonder the interest of such a maneuver, both strategically and politically. By this kind of action, Ukraine totally discredits any intention of implementing the Minsk accords or even to find a peaceful exit from the crisis. But it is true that it enjoys a particularly favorable media coverage in the West, and political cover that allows it, for the moment, to act with impunity. Even its revisionist nationalists are invited to university conferences, as France has crossed the red line by dint of compromise.

Let us not forget that this action is part of the Ukrainian process of systematic violation not only of the Minsk accords, but also of international standards protecting civilians in times of war. Thus, they continue fire on the water filtration station every time it is repaired in order to deprive the civilian populations of drinking water. The Ukrainian army uses artillery about 1200 times in 24 hours; fighters find tanks and heavy Ukrainian artillery right on the line of separation, while they should be pulled back from it, and OSCE looks the other way.

How long will they continue keeping their eyes closed?

Kiev has cut off water supplies to the Lugansk People’s Republic, the Ministry of Communications of the LPR has reported.
Water supplies from the Western Filtration and Pumping Station were cut off at 3:00 A.M. Although Kiev has said such is the result of an industrial accident, the LPR says that no official documents confirming such have been provided.
The water station in question is on Ukrainian territory and supplies water to Pervomaysk, Stakhanov, Kirovsk, Bryanka, Alchevsk, Perevalsk, Krasny Luch, and Antratsit.
LPR authorities have warned that changes in water delivery schedules will be implemented in connection with this incident.
This is not the first time that Ukraine has used water as a weapon against the Donbass republics. Earlier this week, on March 6th, Ukraine cut off supplies from the Petrovsky Pumping Station which supplies water to Slavyanoserbsk and Lugansk.
According to the LPR’s Lugansk Water Corporation, the republic has reduced its dependency on water supplies from Ukraine to 15%, with approximately 84% of water demand covered by the republic itself. This does not mean, however, that civilians do not suffer when Kiev decides to cut off water and other necessities. Rather, this fits into the larger framework of Ukraine’s war of attrition or psychological warfare against the Donbass republics.
http://www.fort-russ.com/2017/03/kiev-cuts-off-water-to-lugansk.html 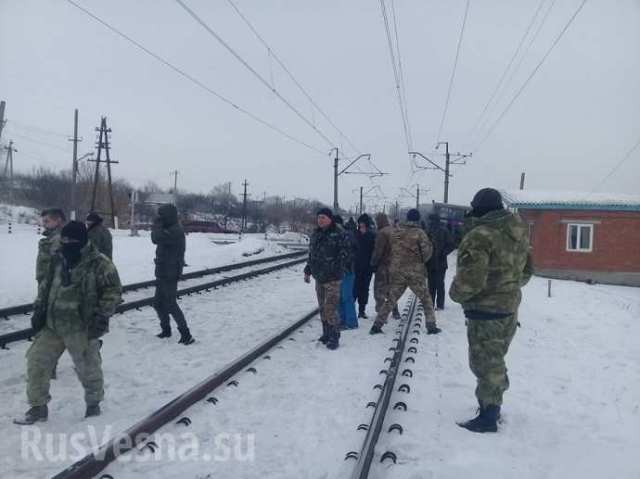 If participants in the trade blockade of Donbass do not reach their goals, they plan to sever the supply of electricity and water to the republic to create “intolerable conditions”, typical of the inhumanity of extremist factions and fascists who lack humanitarian understanding of populations and their needs.
This was stated by the second commander of the dangerous and extremist battalion “Donbass”, Anatoly Vinogrodsky, a virulent ultranationalist and fascist sympathizer.
“We will close the supply of all goods, electricity and water, which will flow into the occupied territory, in order to organize unbearable conditions for the population, so they began to harass Zakharchenko and his minions”, Vinogrodsky stated bluntly.
http://www.fort-russ.com/2017/03/ukrainian-extremists-threaten-to-sever.html

Since the early morning of February 23rd, the Ukrainian Armed Forces have been particularly active across the entire Donbass front. Grassroots sources such as “Updates from the Novorossiya Militia,” “Burning Hearts of Donbass”, and the “GO Alert Group of Novorossiya” have been reporting the situation on social media.
War correspondents have reported: “Since 06:35, the Dzerzhinsky front has been active, and the enemy has been unusually active on the Svetlodarsk front.”
According to the Donbass militia and local residents, UAF shells have hit the village of Zaytsevo north of Gorlovka. “Gorlovka is loud in the north and northeast. There are reports of incoming shells hitting the Zaytsevo area,” a report reads.
The Donetsk front is also restless. In the Petrovka district firefights broke out this morning and the UAF fired off small arms, mortars, and artillery.
Local residents have confirmed incoming reports.
It has also been reported that this morning Ukrainian troops shelled the Donetsk filtration station. As a result, the Donbass Water Company has confirmed, the water filters have been damaged.
In addition, the UAF has opened fire on the Mayorsk checkpoint near Gorlovka. Fortunately, no shells hit the checkpoint directly.
War correspondents have urged civilians not to lose vigilance.
At 10:00 this morning, the Ukrainian troop activity was also recorded by the Lugansk People’s Republic. Citizen reports have warned people to be careful and stay away from the Bakhmutka highway.
http://www.fort-russ.com/2017/02/ukraine-opens-fire-across-entire.html

Syrian Minister of Water Resources Nabil al Hasan spoke to Sputnik about the condition of the water source called Ain el Fijeh in Damascus, which provided many people with water and later on was hit by the terrorists.

“After a full examination of the source we came to a conclusion that 85% of the buildings above the source such as the water pumping station, equipment and power grids are all damaged. The terrorists blew it up in three different places so the source Harush is completely destroyed now,” Hasan said.The minister further said that the water was allowed to flow through the river channel until the water supply resumed its work.

Later on, about 10 hours after the initiation of the repair, the pumps started pumping water into the water storage of Damascus.

The water samples were then taken for quality analysis. After the results come back, it will be decided whether to supply the water to the residents.

“The battle took place at night. The snipers were shooting at us from every side possible,” Hariri said.

“From January 1 to 23 about 50 soldiers, including myself, took a position in the house opposite the source. The distance between us and the source did not exceed 100 meters. The militants using megaphones, constantly threatened us, saying that they will destroy the entire station,” the soldier said.

According to him the Syrian soldiers started the operation from the mountains. They used an infrared camera to determine the militants’ positions.

“We went for the terrorists from both the sides: by rail and along the buildings. We managed to divert their attention and destroy their united front,” Hariri said.

The terrorists tried to mine the water source to blow it up completely but the soldiers firmly occupied the station and courageously guarded it.

After winning the battle, the soldiers found a lot of weapons such as sniper rifles and bombs, made in Israel in the terrorists’ weapon arsenals.

In December 2016, militants from Jabhat Fatah Al-Sham, formerly known as the al-Nusra Front, blew up a water pipeline in the Wadi Barada area and seized the only source of drinking water for Damascus citizens.

In January 2017, the Syrian army fully liberated the Wadi Barada area near the Syrian capital of Damascus, where the main water source is located, from militants.

According to a report in Al Masdar News this morning, “the Syrian Arab Army raised the flag of the Syrian Arab Republic over the Al-Fijah Springs on Saturday, marking the first time in 4 years that this site has been under government control”. The now, familiar, corporate media blame-laying upon Syrian President, Bashar Al Assad, has taken on a whole increased fervour since the liberation of Aleppo, their long time raison d’etre for their No Fly Zone demands.

To suggest that the Syrian state would deprive its own people of essential water, the five million inhabitants of Damascus, people steadfastly loyal to their State, their army and her allies, is ridiculous and obscene.  However, it is no great surprise to see this level of distortion of truth by the corporate media who have made an art form of such deceit for the last six years of the NATO state dirty war against Syria.

Brandon Turbeville covers the subject of Wadi Barada in his latest article:

“If there were any doubt that the water crisis in Damascus was created by the Western-backed terrorists operating outside the city, the end to that crisis should now dispel the rest of that doubt. This is because the crisis is now over precisely because the Syrian military was able to retake the area.

Indeed, the Syrian military has taken back the Wadi Barada area, forcing the terrorists to leave, surrender, or die so that the experts and specialists can attend to repairing the damaged water system and begin providing clean water for the people of Damascus.

Of course, the mainstream media is doing its best to ignore this story and will likely not be reporting on the fact that it is the Syrian government which is providing the water to the people of Damascus after America’s terrorist rats cut it off, nor will it mention that the Syrian government was not in control of Wadi Barada and could not have been in control of the water supply and the water treatment plant coming from that location. Thus, it could not have been the Syrian military who poisoned the water supply.

According to a report by Leith Fadel of Al-Masdar News,

The three week long water crisis in Damascus has finally come to an end after an agreement was put in place between the government and jihadist rebels on Friday afternoon.

Following their successful military operation to seize Bassima village on Thursday, the Syrian Arab Army (SAA) was able to cutoff the jihadist rebels from the Al-Fijah Springs, forcing the militants to either starve themselves out of the area or surrender.

A military source in Damascus told Al-Masdar News on Friday night that water technicians officially entered the Al-Fijah Springs after the jihadist rebels agreed to withdraw from this area.

The remaining territory in Wadi Barada will remain with the jihadist rebels for now until a reconciliation agreement is put in place to surrender the area to the Syrian Arab Army and their allies in Damascus.

Shortly after the liberation of Aleppo, al-Qaeda fighters in the Barada Valley outside Damascus dumped diesel fuel into the water supply to the city on December 22. Obviously, this made the water supply impossible to consume and, on December 23, the Syrian military launched a campaign to retake the area and to restore the city’s water supply.

A number of organizations signed a letter of intimidation to the Syrian government demanding that the SAA halt its siege, saying that they would turn on the water if the SAA ceased military operations. One of the groups signing the letter was the corporate media darling known as the White Helmets.